It is an established fact that overweight and obesity constitute major public health challenges in today’s society [1]. The number of individuals who are overweight or obese is increasing rapidly, and the World Health Organization (WHO) has gone so far as to call the worldwide rise in obesity a global epidemic [2]. According to the National Health and Nutrition Examination Survey (NHANES III) [3], more than 64% of American adults are overweight and 23% are obese. Unfortunately, this dramatic increase in obesity is not limited to adults. The number of overweight and obese children and adolescents is also on the rise [4]. The increasing prevalence of childhood obesity is a major concern not only because of the short-term health problems it causes, but also because it increases the risk of developing cardiovascular disease (CVD) in adulthood [5].

Obesity is a chronic metabolic disorder associated with CVD and increased morbidity and mortality [6-9]. Increased body fat is also associated with numerous co-morbidities such as heart disease, type 2 diabetes, stroke, hypertension, dyslipidemia, certain cancers, and sleep apnea [10]. In clinical practice, however, physicians are continually challenged by the absence of metabolic abnormalities in some obese patients who have a “normal” metabolic profile despite their excess body fat. Because of this, obesity was long not considered among the “heavyweights” of modifiable CVD risk factors, such as smoking, diabetes, a dyslipidemic state, and hypertension (Figure). In addition, there is no independent association between excess body fat and CVD once the relationship between obesity and hypertension, dyslipidemia and diabetes is taken into account. The absence of an independent association between obesity and CVD could be explained by the fact that obesity is heterogeneous as a CVD risk factor.

When the high-risk form of obesity (abdominal obesity) is considered, its impact on CVD could be approximately equal to that of smoking and may even exceed that of LDL cholesterol [11]. It has been suggested that any decrease in smoking-related CVD risk has been offset by the increase in obesity [12]. In this regard, Mokdad et al. [13] have reported that, if obesity rates continue to skyrocket in the next few years, overweight and obesity caused by poor eating habits and physical inactivity will likely overtake tobacco as the leading preventable cause of mortality. In fact, they estimate that about 365,000 deaths annually are due to sedentary lifestyles and poor nutrition. Unfortunately, the sharp rise in overweight and obesity strongly suggests that this number will increase considerably in the near future. In response, the American Heart Association has reclassified obesity as a major modifiable risk factor for coronary heart disease (CHD) [14].

The association between overweight and CVD risk was first recognized in the Framingham Heart Study [15]. After 26 years of follow-up, the study authors concluded that obesity was a significant independent predictor of CVD, including CHD, coronary death, and congestive heart failure in both middle-aged men and women. This relationship was independent of age, cholesterol, systolic blood pressure, cigarette smoking, left ventricular hypertrophy, and glucose intolerance. In addition, when examining the 44 years of Framingham Heart Study follow-up, Wilson et al. [9] showed that CVD risk was higher among overweight and obese men and women after adjusting for age, smoking, high blood pressure, high cholesterol, and diabetes. Moreover, the Nurses’ Health Study [16]—a 16-year follow-up study—indicated that the risk of death from CVD was significantly higher among overweight and obese women (body mass index (BMI)>27 kg/m2) as compared to lean women (BMI<19 kg/m2). Overweight and obesity must therefore be considered significant and hopefully modifiable CVD risk factors.

In another study examining obesity’s contribution to CVD risk, Mora et al. [17] demonstrated that a high BMI value significantly increased CHD risk in apparently healthy siblings from families with premature CHD, but mainly among siblings with a high Framingham risk score. Significantly, adiposity indices such as BMI were not initially included in the Framingham risk score, which uses sex-specific risk equations to estimate CHD events based on variables such as age, total cholesterol, HDL cholesterol, blood pressure, diabetes, and smoking status [18]. Mora et al. [17] have also demonstrated that BMI is an independent predictor of CHD risk that lends additional predictive weight to the Framingham risk score. Moreover, normal weight subjects with an elevated Framingham risk score were shown to have a low CHD event rate similar to normal weight subjects with a low Framingham risk score. Thus, it appears that the landscape of modifiable CVD risk factors has evolved over the last 50 years and that obesity is now a major cause of CVD. In this regard, the Framingham Heart Study now includes BMI as a predictor of 10-year CVD risk [19] and 30-year CVD risk [20] in their algorithms using non-laboratory-based predictors. Several risk functions are available on the Framingham Heart Study website. 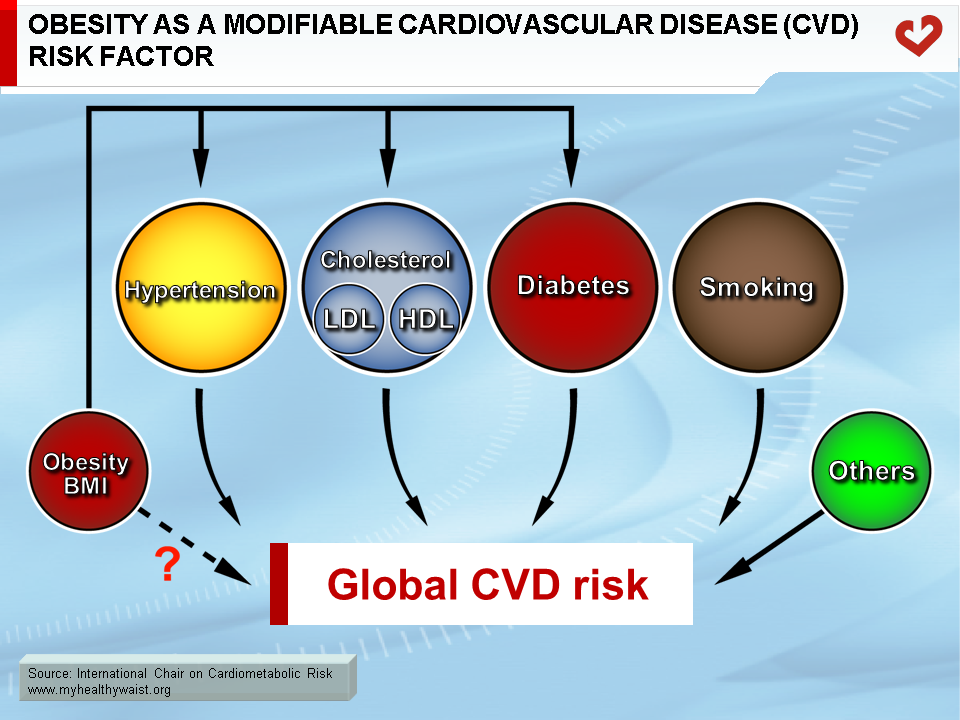 Obesity: the Primary Cause of The Metabolic Syndrome?

WHO 2000 Obesity: Preventing and managing the global epidemic. Report of a WHO consultation. [WHO Technical report series No. 894]. Geneva. World Health Organization 2000.