Cardiovascular disease (CVD) is a multifactorial disease. For it to be managed effectively, all risk factors must be taken into account, including smoking. Cigarette smoke contains some 4,000 compounds, including carbon monoxide, ammonia, and known carcinogens [1], and the nicotine in cigarettes is highly addictive. Cigarette smoking is not only linked to various cancers (lung, esophagus, bladder, kidney, stomach, pancreas, etc.) and pulmonary diseases, it also significantly increases the risk of coronary heart disease (CHD), stroke, and peripheral vascular disease. Given its ties to so many health problems, cigarette smoking is a major modifiable risk factor that should be targeted aggressively as part of CVD prevention and management.

On a global scale, smoking-related mortality is set to rise from 3 million annually (1995 estimate) to 10 million annually by 2030, with 70% of these deaths occurring in developing countries [2]. Smoking prevalence in men is currently highest in Pacific region countries, such as South Korea (68%), China (61%), and Japan (59%).

Among Americans aged 18 and older, 23.4% of men (25.1 million) and 18.5% of women (20.9 millions) are smokers, which puts them at increased risk of CHD [3]. From 1997-2001, approximately 437,902 Americans died each year of smoking-related illnesses, and 34.7% of these deaths were related to cardiovascular complications [4]. On average, male smokers die 13.2 years earlier than male non-smokers, whereas female smokers die 14.5 years earlier than non-smoking women [3]. Moreover, it has been estimated that 35,052 non-smokers die from CHD each year in the United States as a result of exposure to environmental tobacco smoke [4].

It is well established that cigarette smoking is one of the most important modifiable risk factors for CHD [3,5-14]. The Centers for Disease Control and Prevention have reported that cigarette smokers are 2 to 4 times more likely to develop CHD than non-smokers [3]. Smokers are also more than 10 times more likely to develop peripheral vascular disease than non-smokers. It has been estimated that cigarette smoking approximately doubles a person’s risk for stroke. The pooled relative risk of stroke associated with cigarette smoking was 1.5 in a meta-analysis conducted by Shinton et al. [9]. In addition, the Atherosclerosis Risk in Communities (ARIC) Study showed that smoking-related CHD risk was much higher in the presence of higher LDL cholesterol [15]. In the INTERHEART study, a myocardial infarction case-control study conducted in 52 countries, current smokers had a greater risk (odds ratio [OR]: 2.95) of acute myocardial infarction (AMI) compared to individuals who had never smoked. By shortening life, smoking decreases CVD probability and duration throughout the life course, though non-smokers live many years longer and are longer free of CVD than smokers [16]. The risk associated with cigarette smoking varies with age, sex, ethnicity, amount of cigarettes smoked per day, and other factors.

Effect of Age
CVD risk was higher among smokers before age 70 in Framingham Heart Study participants [16]. The relative risk of stroke associated with smoking is present at all ages but is far greater in younger people [9,17]. In fact, it was found to be 2.9 in individuals under 55 years of age, 1.8 for those 55-74 years old, and 1.8 after 75 years of age [9]. In the INTERHEART cohort, the effect of smoking was much greater in younger (OR for AMI of 5.60) than in older individuals (OR of 3.60), especially in heavy smokers (more than 20 cigarettes per day) [18].

Effect of Sex
In Framingham cohort participants, the CVD risk associated with smoking ranged from 1.39 to 1.65 in women and men, respectively [16]. In the meta-analysis by Shinton et al. [9], the pooled relative risks of stroke in men and women were 1.72 and 1.43, respectively. However, other studies have also reported an increased relative risk of CHD from smoking in women when compared to men [9,17,19-21]. This inconsistency could be due to the fact that women have a higher dose per unit of body mass from a single cigarette.

Effect of Ethnicity
In addition, smoking has been suggested to be more harmful to Whites than to Hispanics and Blacks [22]. In the Asia-Pacific region, cigarette smoking has been shown to be a risk factor for both CHD and stroke, independent of body mass index (BMI), blood pressure, and cholesterol [17]. In this population, the relative risk was 1.6 for CHD, 1.19 for hemorrhagic stroke, and 1.38 for ischemic stroke.

Effect of Passive Smoking and Environmental Smoke
Numerous epidemiological studies and reviews have studied the effect of passive smoking on CHD risk. A meta-analysis by He et al. [23] reported that passive smoking along with exposure to environmental smoke in non-smoking individuals increases CHD risk. In non-smokers exposed to environmental smoke, the relative risk of CHD was 1.25 and a dose response was clearly observed, with relative risks of 1.23 and 1.31, respectively, for non-smokers who were exposed to the smoke of 1-19 cigarettes per day and those who were exposed to the smoke of 20 or more cigarettes per day. In the INTERHEART study, AMI risk attributable to tobacco smoke exposure for more than 1 hour per week in never smokers was 15.4% [18].

When compared to non-obese smokers, obese smokers have a clear reduction in life expectancy [24,25]. Obesity induces several inflammatory markers and cytokines that might contribute to cardiovascular risk. Cigarette smoking, especially in chronic smokers, has also been linked to the induction of several cytokines, such as intracellular adhesion molecule-1 (ICAM-1), tumor necrosis- α (TNF-α), and oxidative stress molecules, while decreasing adiponectin concentrations, inducing insulin resistance, and promoting endothelial dysfunction, which is an early marker of atherosclerosis [26]. Furthermore, smoking has also been linked to insulin resistance and low HDL cholesterol levels [27]. The figure shows the additional effects of smoking in obese individuals.

In addition to being a risk factor for arteriosclerosis and ischemic stroke, smoking also increases visceral adipose tissue such that smokers have more of this harmful type of fat compared to non-smokers, even after adjusting for markers of total adiposity [28,29]. These results strongly suggest that body fat distribution can be modified by behavioural factors such as cigarette smoking, despite a well-documented genetic susceptibility to visceral adiposity [30]. This finding is especially important given that visceral obesity has been reported to be closely associated with the features of the metabolic syndrome increasing the risk of CVD and type 2 diabetes [31]. 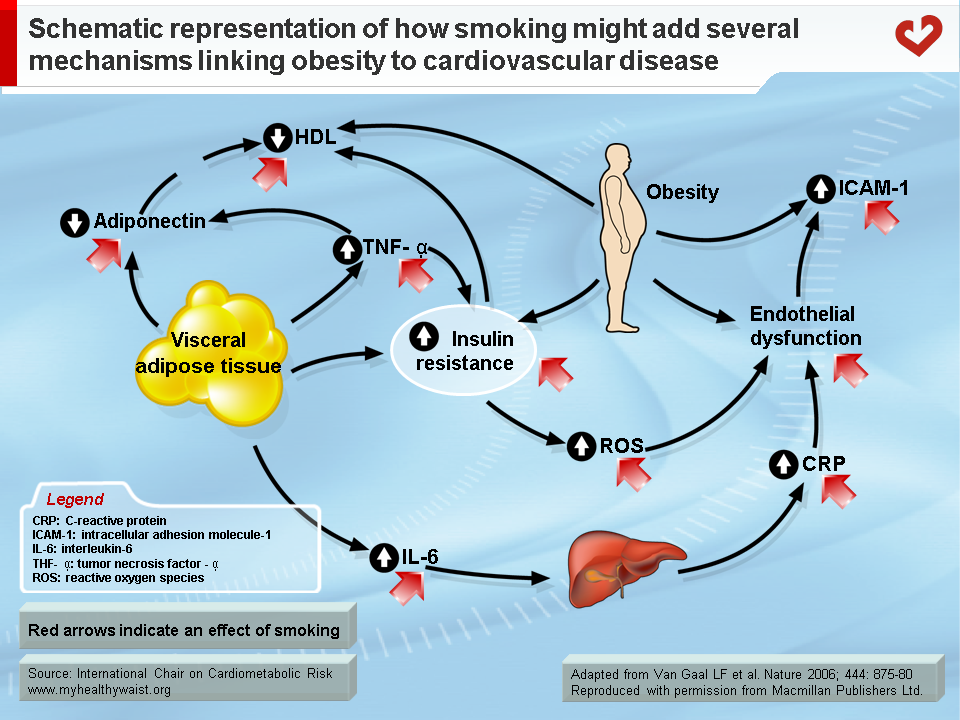 Figure:
Schematic representation of how smoking might add to several mechanisms linking obesity to cardiovascular disease

The only way to decrease a smoker’s CVD risk and eliminate this major CVD risk burden is complete smoking cessation. Each cigarette temporarily increases heart rate and blood pressure, and smoking just a few cigarettes per day has been shown to be harmful to cardiovascular health. Because smoking duration is linked to smoking-related morbidity, early cessation and prevention of relapse are both important objectives.

In the meta-analysis by Shinton et al. [9], ex-smokers under the age of 75 seemed to retain an appreciably increased risk of stroke (1.5), but for all ages, the relative risk in ex-smokers was found to be 1.2. In a systematic review by Critchley et al. [32], quitting smoking was associated with a 36% (relative risk of 0.64) reduction in relative risk of mortality in patients with CHD who quit smoking when compared to those who continued smoking, regardless of age and sex. In Asia, the smoking epidemic’s impact is enormous, and quitting has been shown to provide a clear benefit. In this region, the hazard ratios for ex-smokers was 0.71 for CHD and 0.84 for stroke [17]. In the INTERHEART study, the OR associated with smoking fell to 1.87 (current smoking with an OR of 2.95) within 3 years of quitting. However, in people who had quit smoking 20 or more years ago, there was a residual excess risk of AMI of about 22% [18]. Even though quitting smoking provides clear overall health benefits, the speed and degree of mortality risk reduction associated with quitting is still being debated in the literature.

Several cessation programs/guidelines are available to smokers and health care professionals. In order to improve smoking cessation rates, effective behavioural and pharmacological treatments, coupled with professional counselling and advice, are required. Since smoking duration is the principal risk factor for smoking-related morbidity, cessation and prevention of relapse are both key goals.

The association between cigarette smoking and CVD is overwhelmingly clear. As a result, clinicians must emphasize to their patients the importance of quitting smoking to reduce their relative CVD risk. Also requiring special attention are the harmful effects of passive smoking and environmental smoke exposure with regard to CHD. Many of the adverse health effects caused by smoking are reversible, and smoking cessation treatments are among the most cost-effective healthcare interventions. Although quitting smoking at a younger age confers the greatest benefit, even those who quit in middle-age can avoid much of the excess healthcare risk associated with smoking.

Stevens J, Cai J, Evenson KR, et al. Fitness and fatness as predictors of mortality from all causes and from cardiovascular disease in men and women in the lipid research clinics study. Am J Epidemiol 2002; 156: 832-41.