On March 17, the International Chair on Cardiometabolic Risk (ICCR) held another successful and well-attended symposium at the MEDEC 2010 which is the annual French primary care physicians conference. The purpose of the symposium was to raise the family physicians awareness on the relationships between the consumption of sugar-sweetened beverages (SSB) and the risk of obesity, type 2 diabetes and cardiovascular disease (CVD). The symposium was chaired by Dr. Bernard Charbonnel, an internationally renowned academic diabetologist from Nantes, France. The two invited speakers of the session were Dr. Jean Dallongeville, an epidemiologist from the Pasteur Institute in Lille, France and Prof. Jean-Pierre Després from Université Laval, Québec, Canada, who is also the Scientific Director of the ICCR.

In his talk, Dr. Dallongeville reviewed the evidence that the mosaic of modifiable CVD risk factors has changed in France, this phenomenon having a certain positive impact on cardiovascular mortality in this country. Unfortunately, he pointed out that, as in most countries around the world, the prevalence of obesity has also increased in France and that this phenomenon could be due to changes in physical activity and eating habits observed in the French population. He also showed that drinking habits in France have also changed with evidence of a progressive increase in the consumption of SSB. As he showed experimental data indicating that an increased consumption of sugary beverages was not accompanied by a compensatory reduction in the caloric intake from solid foods, he concluded that an increased consumption of SSB would therefore lead to an increased caloric intake and eventually to obesity. 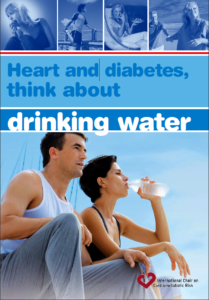 Dr. Després discussed the epidemic of obesity and the importance of paying attention to abdominal obesity as it is clearly the form of obesity most strongly associated with the risk of type 2 diabetes and CVD. He also pointed out that although obesity is a multifactorial condition, all epidemiological and experimental studies have suggested that an excessive consumption of SSB may contribute to increase the risk of obesity, type 2 diabetes and CVD. Furthermore, he suggested that part of the effect of SSB on the risk of type 2 diabetes may be independent from body weight gain, a finding consistent with the effect of a large glycemic load on insulin secretion and eventually, beta-cell exhaustion.

Overall, these results suggest that it might be prudent to limit our intake of sugary beverages to prevent a passive overconsumption of calories contributing to increase the risk of obesity and co-morbidities. Thus, a hydration pyramid was proposed with water being the favoured hydration product (at the base of the pyramid) whereas sugary beverages should be consumed occasionally and with moderation, particularly among sedentary or abdominally obese individuals.

The ICCR has prepared an educational flyer on healthy drinking.
To download the flyer (PDF), click here.