There is a wealth of evidence suggesting that visceral adipose tissue, insulin resistance, and the development of the metabolic syndrome and/or type 2 diabetes are closely linked [1,2]. In addition to its ties to abdominal obesity, the metabolic syndrome has also been linked to blood lipid disorders, an inflammatory and pro-thrombotic state, hypertension, and insulin resistance. In this regard, Palaniappan et al. [3] found that the best predictors of incident metabolic syndrome over a 5 year follow-up were waist circumference, HDL cholesterol, and proinsulin levels. They examined a sample of 714 men aged 54.4 ± 8.5 years at the beginning of follow-up who participated in the Insulin Resistance Atherosclerosis (IRAS) Study. The authors suggested that steps should be taken to address components of the metabolic syndrome, such as waist circumference, in order to reduce the risk of developing the syndrome and related complications such as type 2 diabetes and cardiovascular disease. This study also showed that waist circumference was a better predictor of metabolic syndrome than directly measuring insulin sensitivity with an oral glucose tolerance test. The contribution of various lifestyle and therapeutic interventions to reducing body weight, abdominal fat in particular, and preventing insulin resistance and type 2 diabetes is examined below.

Although each component of the metabolic syndrome can be targeted separately through pharmacotherapy, it is also possible to take a more global therapeutic approach to treating the metabolic syndrome and/or type 2 diabetes by focusing on reducing excess atherogenic/diabetogenic visceral adipose tissue, which is often present in patients with the clustering abnormalities of this syndrome. The causes of this preferential adipose tissue accumulation include an obesogenic and diabetogenic diet, a low level of physical activity leading to a positive energy balance, and genetic susceptibility. These causes should all be targeted to reduce the risk of developing the metabolic syndrome and type 2 diabetes [4]. As depicted in Figure 1, abdominally obese individuals should be encouraged to increase their daily energy expenditure in order to decrease visceral adipose tissue and improve their plasma lipoprotein-lipid profile and indices of plasma glucose-insulin homeostasis. Typically, this loss of visceral adipose tissue reduces free fatty acid flux to the liver, which slows hepatic VLDL production, lowers plasma triglyceride and apolipoprotein B levels, and increases HDL cholesterol concentrations [5]. It also changes the pattern of adipose tissue secretory products, causing interleukin-6 levels to fall and adiponectin concentrations to rise, which improves insulin sensitivity [6,7]. The end product of abdominal fat loss is a reduction in C-reactive protein levels.

Several studies have highlighted the benefits of lifestyle changes in preventing type 2 diabetes in subjects with impaired glucose tolerance (IGT). The first large study to illustrate the key role played by a lifestyle modification program in preventing diabetes among individuals with glucose intolerance was the Finnish Diabetes Prevention Study [8]. In that study, a sample of 522 middle-aged men and women, who were all overweight with IGT, were randomly assigned to an intervention group designed to lower total intake of fat (especially saturated fats) to less than 30% of energy consumed, increase intake of dietary fibre, and ensure participants took part in moderate exercise for at least 30 minutes per day. After 4 years, the overall cumulative incidence of diabetes dropped by 58% in the lifestyle modification group, with the reduction directly linked to lifestyle changes. Cumulative diabetes incidence was 11% and 23% for the intervention and control groups, respectively. Significantly, the lifestyle intervention program reduced waist circumference by 4.4 ± 5.2 cm and improved both glucose-insulin homeostasis variables and lipoprotein-lipid parameters associated with the metabolic syndrome. Based on these results, the authors concluded that 22 subjects with IGT must be treated with lifestyle interventions to prevent one case of diabetes. Moreover, investigators of the Finnish Diabetes Prevention Study were interested to test whether the originally-achieved lifestyle changes and risk reduction remained after interruption of active counselling [9]. Thus, individuals who were still free of type 2 diabetes after the 4-year active intervention period were further followed for 3 years. During the total follow-up period of 7 years, a 43% relative risk reduction was observed in the lifestyle modification group compared to the control group.

Using a similar approach, the Diabetes Prevention Program randomly assigned 3,234 participants with IGT to a placebo with standard lifestyle recommendations, the antihyperglycemic agent metformin with standard lifestyle recommendations, or a lifestyle modification program designed to achieve and maintain a 7% body weight reduction [10]. During the 4-year follow-up, diabetes incidence dropped by 58% and 31% for the lifestyle and metformin groups respectively, as compared to the placebo (Figure 2). Compared to the metformin group, a greater number of subjects in the lifestyle group had normal post-load glucose values at the end of the follow-up. Similarly, compared to the placebo, the lifestyle group experienced a 41% reduction in metabolic syndrome incidence and the metformin group experienced a 17% reduction. Among features of the metabolic syndrome, both intervention groups saw their HDL cholesterol levels rise and their waist circumference and fasting glucose levels improve. However, only the lifestyle intervention group experienced a decrease in triglyceride levels and blood pressure [11]. The Diabetes Prevention Program also investigated its impact over a longer (10 years) follow-up period [12]. Reductions in the diabetes incidence of 34% in the lifestyle group and of 18% in the metformin group were observed compared to the placebo group. Because of the remarkable success on the prevention of type 2 diabetes generated by lifestyle changes, the National Diabetes Prevention Program was created in 2010 to address the increasing burden of prediabetes and type 2 diabetes in the United States.

The Da Qing IGT and Diabetes Study sought to determine whether combining diet and exercise could reduce the overall incidence of diabetes in 577 men and women with IGT from the city of Da Qing, China [14]. Subjects were randomized to a control group or to one of three lifestyle intervention groups (diet only, exercise only, or diet plus exercise). In the control group, the cumulative 6-year incidence was 67.7%, whereas the incidence was 43.8%, 41.1%, and 46.0% in the diet group, exercise group, and diet-plus-exercise group, respectively. The investigators also studied the very long-term (30 years) effects of their intervention [15]. To do so, they pooled the three intervention groups and examined to what extent lifestyle changes could have a sustained impact on the incidence of diabetes. In comparison with the control group, the combined intervention group had a 4-year delay in the onset of diabetes. These results provide substantial evidence in support of the importance of lifestyle recommendations focusing on physical activity and healthy eating among IGT subjects who are at increased risk of developing type 2 diabetes.

PREDIMED-Reus was a study performed in 418 nondiabetic participants randomly assigned to three groups: 1- education on a low-fat diet (control group), 2- Mediterranean diet plus extra-virgin olive oil, 3- Mediterranean diet plus nuts [16]. Diets were ad libitum and there was no advice on physical activity. Over the 4-year follow-up of the study, a 52% reduction in diabetes incidence was observed when the two diet groups were compared to the control group.

In an intervention conducted in a primary care environment (The Norfolk Diabetes Prevention Study), the investigators tested a lifestyle intervention program provided with or without the support of trained volunteers living with type 2 diabetes [17]. Although no additional influence of lay volunteers was observed, the investigators could nevertheless report that a lifestyle modification program implemented in primary care was indeed effective in lowering the incidence of diabetes by more than 40%.

Ross et al. [18] randomized 52 obese men (BMI 31.3 ± 2.0 kg/m2, waist circumference 110.1 ± 5.8 cm) to four study groups: 1- diet-induced weight loss, 2- exercise-induced weight loss, 3- exercise without weight loss, and 4- a control group. During the 3-month intervention program, body weight decreased by an average of 7.5 kg in both weight loss groups. Waist circumference also decreased in the weight loss groups. Subcutaneous and visceral fat decreased in both weight loss groups. Although more subcutaneous adipose tissue was lost, the relative proportion of visceral fat loss was greater than the relative proportion of subcutaneous fat loss. Furthermore, subcutaneous and visceral adipose tissue decreased in the exercise without weight loss group. In both weight loss groups, the relative reduction in visceral fat was greater than the relative reduction in subcutaneous fat, as illustrated in Figure 3. Although no association was observed between total and abdominal subcutaneous fat and measures of insulin sensitivity, there was a significant relationship between corresponding changes in visceral fat and glucose area under the curve during an oral glucose tolerance test (r=0.35) and glucose disposal (r=-0.49). The authors concluded that increasing daily energy expenditure through exercise reduces visceral adiposity and improves insulin sensitivity, even in the absence of weight loss. It also prevents weight regain in men. Although this study was conducted in a relatively small sample of men, it supports the notion that targeting visceral adiposity can prevent the development of insulin resistance. This paves the way to larger lifestyle intervention trials to examine whether increasing energy expenditure without necessarily decreasing energy intake can prevent type 2 diabetes among high-risk abdominally obese, dyslipidemic individuals.

In the Women’s Healthy Lifestyle Project, Simkin-Silverman et al. [19] randomly assigned 535 healthy premenopausal women to either a control group or a behavioural, dietary, and physical activity program with modest weight loss goals. Although the intervention group did not lose weight (as opposed to the control group, which had slightly elevated body weight at the end of the 5-year follow-up), the waist circumference of women in the intervention group decreased by 2.9 ± 5.3 cm, suggesting that weight gain and increased waist circumference during peri- to postmenopause can be prevented with a long-term dietary and physical activity intervention program. Furthermore, women who lost weight did not lower their fasting glucose values. However, women who did not lose weight or who gained weight had slightly higher fasting glucose values during follow-up.

Given that abdominal obesity is one of the most prevalent forms of type 2 diabetes, clinical management approaches should focus on reducing visceral adipose tissue by targeting lifestyle habits. This should have an impact on the causal pathways leading to insulin resistance, impaired glucose tolerance, and type 2 diabetes. Health professionals should focus on reshaping patient lifestyles through increased physical activity and improving overall nutritional quality. These measures have proven effective in reducing visceral fat and should be promoted to the general population as valid ways to prevent obesity-related health problems. 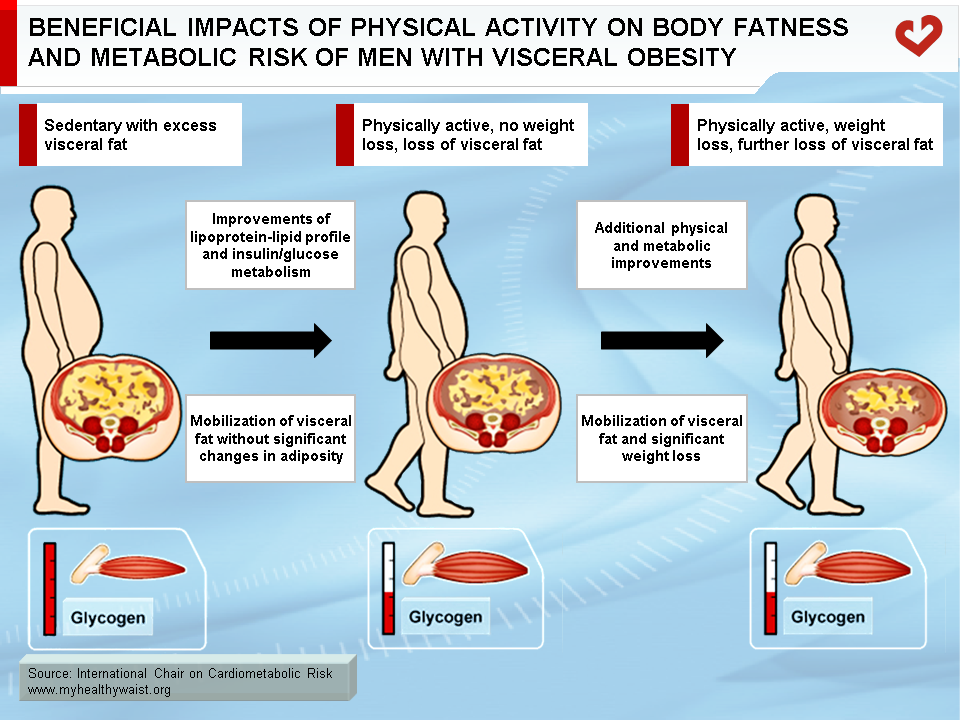 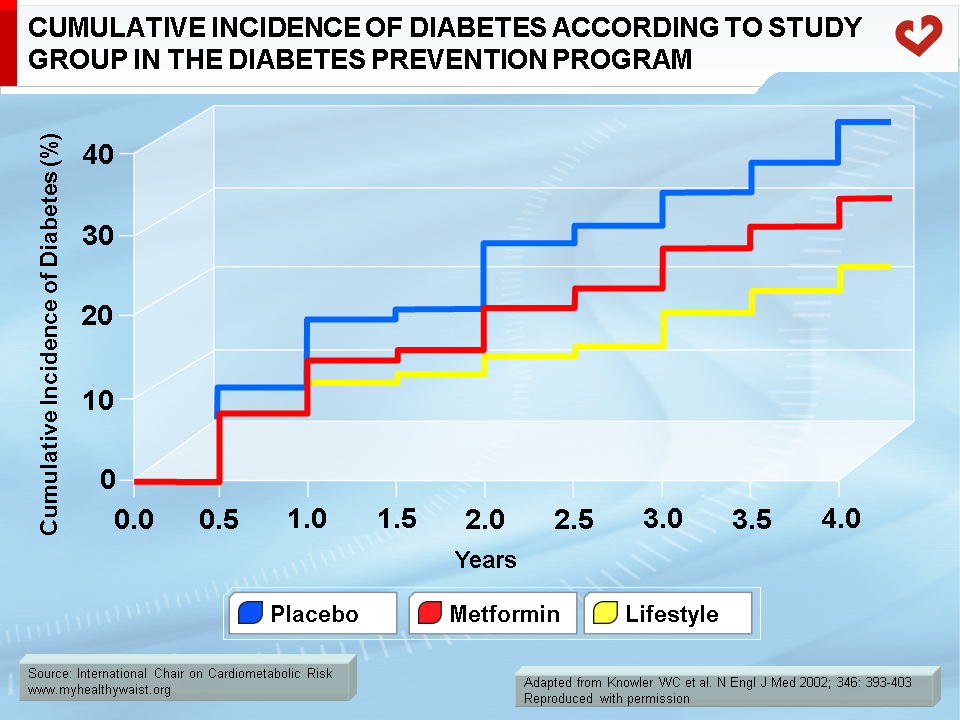 Figure 2:
Cumulative incidence of diabetes according to study group in the Diabetes Prevention Program 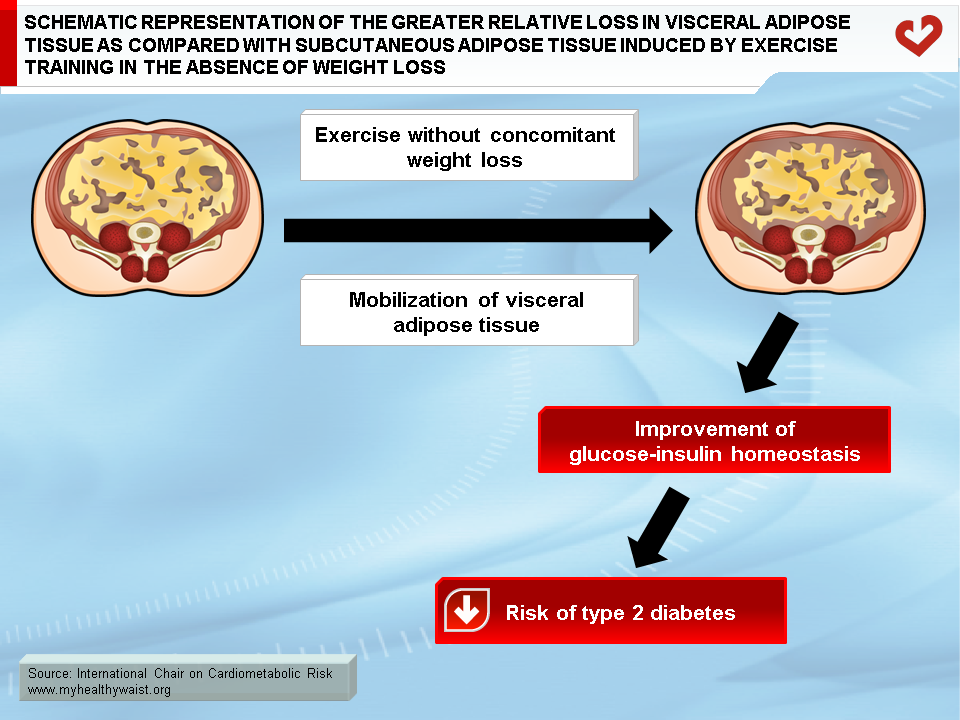 Figure 3:
Schematic representation of the greater relative loss in visceral adipose tissue as compared with subcutaneous adipose tissue induced by exercise training in the absence of weight loss

Pascot A, Després JP, Lemieux I, et al. Contribution of visceral obesity to the deterioration of the metabolic risk profile in men with impaired glucose tolerance. Diabetologia 2000; 43: 1126-35.