Several studies have reported that adipose tissue distribution changes with age. Increasing age has been consistently associated with increased visceral adipose tissue deposition in both sexes [1,2]. This section will briefly review the scientific evidence available on this topic.

Several studies have also documented age-related changes in adipose tissue distribution as reflected by an increase in the waist-to-hip ratio, which has been used as an anthropometric index of relative abdominal adiposity [3,4]. In a sample of 52,953 women, it was found that the body weight increase observed with age was more likely to accumulate in the abdominal area than the gluteo-femoral area [3]. In the 1,179 participants of the Baltimore Longitudinal Study of Aging, a waist-to-hip ratio increase was reported across various age groups (from 17 to 96 years of age) in both men and women [5]. In women, the onset of menopause accelerated abdominal fat accumulation. In another sample of Dutch volunteers (men and women), age was found to be a strong correlate of selective abdominal adipose tissue accumulation as estimated by increased waist circumference [6].

In young pre-menopausal women, age-related changes in visceral adipose tissue relative to total body fat have been reported to be greater than the increase in total body fat over a 4-year follow-up period, and this phenomenon was found to be independent of race (Figure 2) [11]. This study also reported that the age-related increase in total adiposity was greater in African-American women than in white women. However, visceral adiposity was greater in white women at baseline, increased with age, and remained higher in white than in black women. 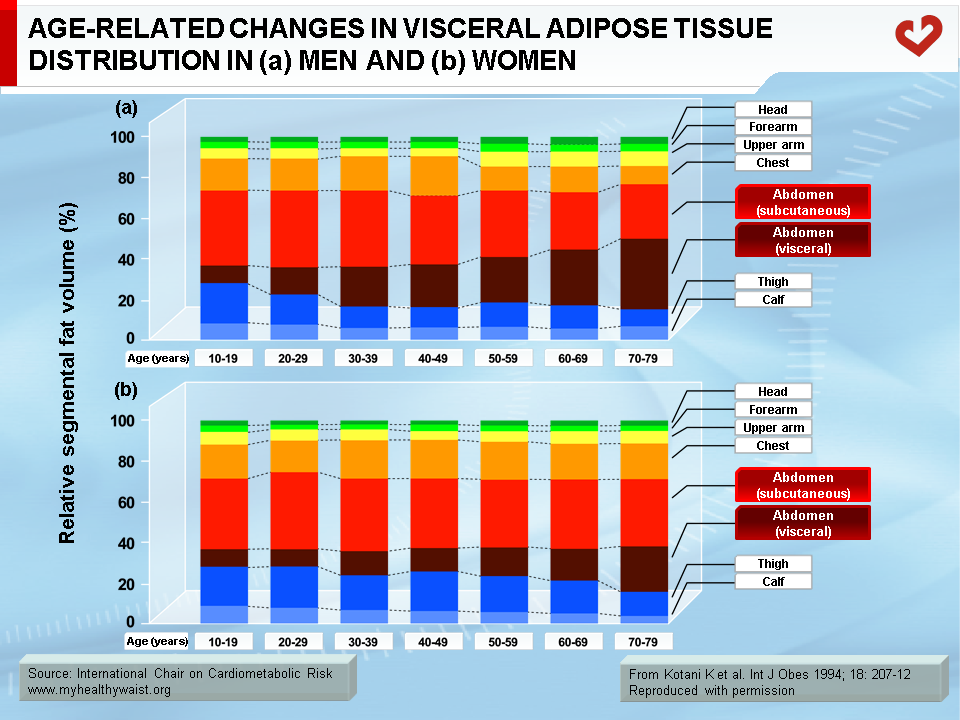 Figure 1:
Age-related changes in visceral adipose tissue distribution in (a) men and (b) women 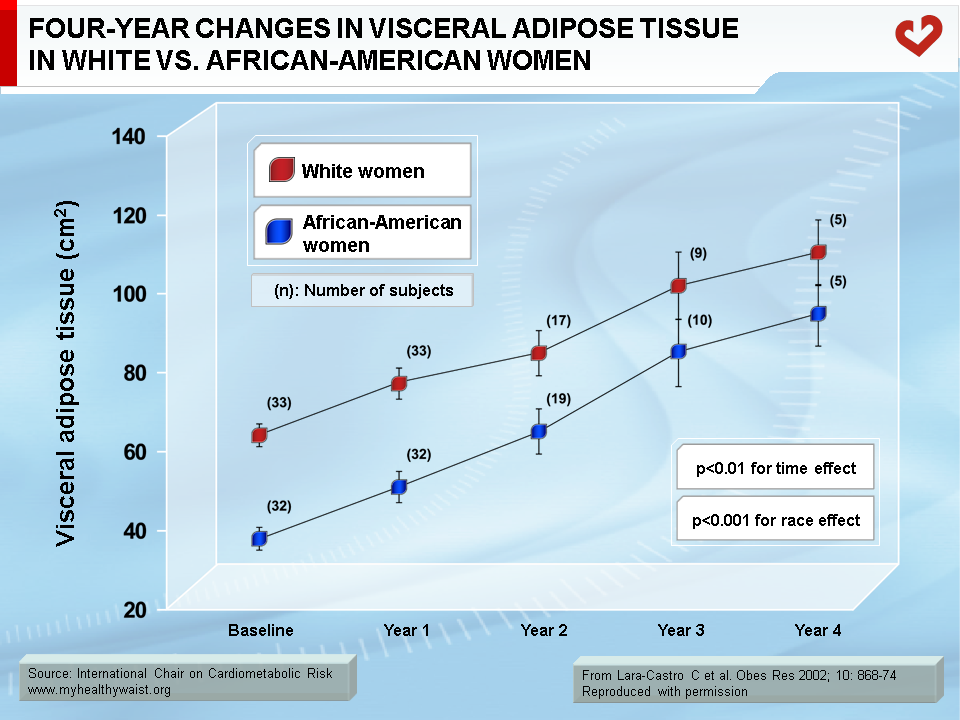 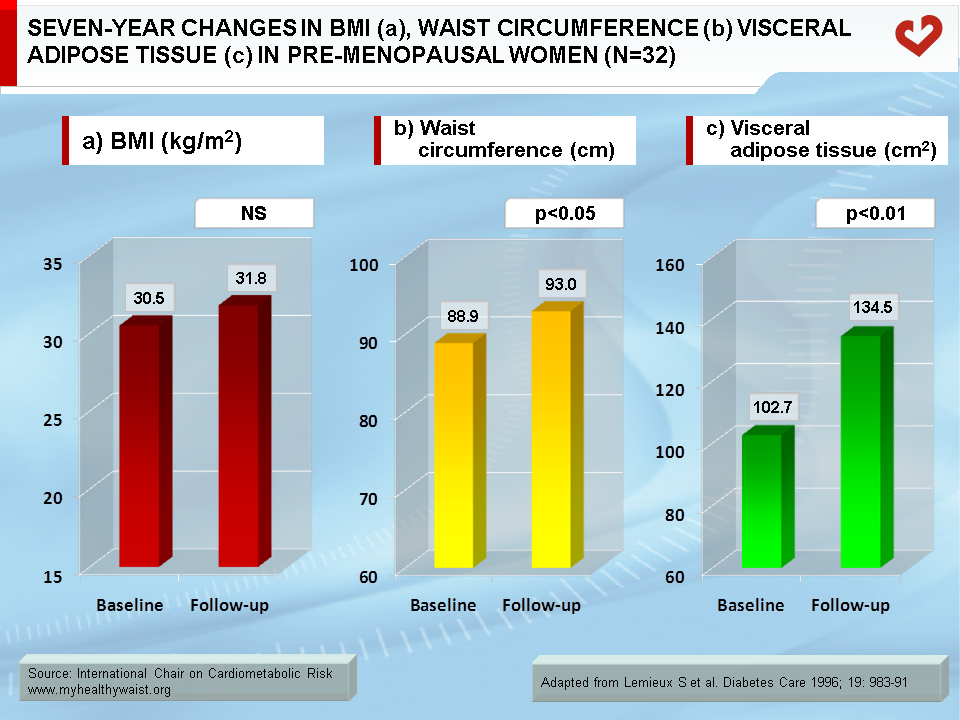 Metabolic Consequences of the Age-related Increase in Visceral Adiposity

It has been clearly established that the prevalence of cardiovascular disease (CVD) increases with age and that the greater number of CVD risk factors in older than younger individuals partly explains this phenomenon [13,14]. For instance, the age-related increase in visceral adiposity has been shown to be an important correlate of alterations in lipoprotein-lipid metabolism and in plasma glucose homeostasis in middle-aged pre-menopausal women when compared to young women [10]. In the same cross-sectional study, when young and middle-aged women with similar levels of visceral adipose tissue and fat mass were compared, some of the well-known age-related differences in the metabolic profile (apolipoprotein B, fasting glucose and glucose area following a 75 g oral glucose challenge) were eliminated. Results from a 7-year follow-up study in pre-menopausal women also showed that the deterioration in plasma glucose and insulin homeostasis indices depended more upon the age-related increase in visceral adipose tissue than upon the increase in total adiposity [12].

Middle-aged men generally have a more atherogenic plasma lipoprotein-lipid profile than young men [15]. However, when middle-aged men with similar total body fat mass and visceral adiposity were compared to young adult men, many age-related differences in the plasma lipoprotein-lipid profile were eliminated, suggesting that the age-related increase in total and visceral adiposity explained many (but not all) age-associated changes in lipoprotein-lipid levels. Lemieux et al. [16] have reported that age is associated with increased LDL particle concentration. The increasing presence of the small, dense LDL phenotype observed in some individuals with age appears to be largely related to an increase in triglyceride levels in both genders [16,17]. As hypertriglyceridemia is another consequence of abdominal obesity—especially visceral obesity—these results highlight the importance of maintaining low levels of visceral fat over time.

Lastly, there is a clear sexual dimorphism regarding changes in abdominal adipose tissue distribution with age, which suggests that abdominal adipose tissue is sensitive to both sex hormones and ageing. Clinicians should be aware of the fact that the increase in visceral adiposity with age predicts a deterioration of their patient’s risk factors profile.