There are clear ethnic differences in BMI and adipose tissue distribution:

The Influence of Ethnicity on Adipose Tissue Distribution

The impact of ethnicity on body fat mass in the U.S. population has been studied by McTigue et al. [1] using the National Longitudinal Survey of Youth 1979, a national U.S. study of 9,179 individuals with over sampling of minority ethnic groups. They observed significant ethnic differences in body weight, with black and Hispanic populations at highest risk of obesity when compared to white populations. Obesity onset was 2.1 and 1.5 times faster for black and Hispanic women respectively when compared to white women. The obesity onset pattern for men was slightly different, with Hispanic men being at highest risk.

A World Health Organization (WHO) expert committee has recommended using body mass index (BMI)—the ratio of weight in kilograms divided by height in meters squared—as an index of relative body weight linked to an increased risk of disease.
They proposed a BMI cutoff value of 25 kg/m2 (but below 30 kg/m2) to define overweight. They also reported that a substantial proportion of Asian people were at increased risk of type 2 diabetes and cardiovascular disease (CVD) at BMI values lower than the proposed WHO overweight cutoff point of ≥25 kg/m2 [2].

Furthermore, a meta-analysis of 32 studies has revealed that mean BMI values (kg/m2) were 21.3 for Ethiopians, 22.2 for Chinese, 22.4 for Indonesians, 23.0 for Thais, 24.1 for Caucasians, 25.7 for Blacks, and 29.7 for Polynesians [3]. BMI therefore differs significantly among populations of the same age, sex, and body fatness. Moreover, in Asian populations, a higher body fat content was reported at a lower BMI when compared to Caucasians [4]. These significant ethnic differences in mean BMI may be explained by differences in energy balance as well as intrinsic differences in body composition. In light of this, the general WHO obesity cutoff point of 30 kg/m2 can no longer be applied worldwide without taking into account ethnicity. Revised BMI cutoff points to define obesity have been suggested for South Asians, Chinese and Aboriginals in a publication of Razak et al. [5]. In fact, cutoff BMI values defining obesity in relation to glucose and lipid levels and blood pressure, three significant CVD risk factors, were found to be much lower for these populations than values traditionally used for people of European origin.

Marked differences have also been reported regarding susceptibility to abdominal obesity. Available data suggests that Blacks are more prone to subcutaneous fat accumulation for a given BMI than Whites [6-9], whereas Asians are especially prone to visceral fat accumulation [2,10]. Fujimoto [11] has suggested that genetic predisposition as well as environmental and lifestyle factors may explain differences among various ethnic groups in their susceptibility to abdominal fat accumulation, visceral fat in particular.

For a similar level of total body fat, white subjects have been shown to have more visceral adipose tissue than Blacks [6-9,12]. When white and black men with the same total body fat mass are compared, white men have significantly more visceral fat than black men. Black women generally have higher total body fat mass but less visceral adipose tissue than white women [6,8,9]. This means black women are more prone to subcutaneous obesity than white women. On the other hand, Japanese individuals are more likely to accumulate visceral fat compared to white individuals, despite the fact that they have substantially less total body fat than their American counterparts (Figure 1) [10]. This difference in susceptibility to visceral adiposity may be one factor behind the high rate of type 2 diabetes in Asia.

As a summary, Figure 2 illustrates relative accumulation of visceral vs. subcutaneous depots in Caucasians, Blacks and Asians. 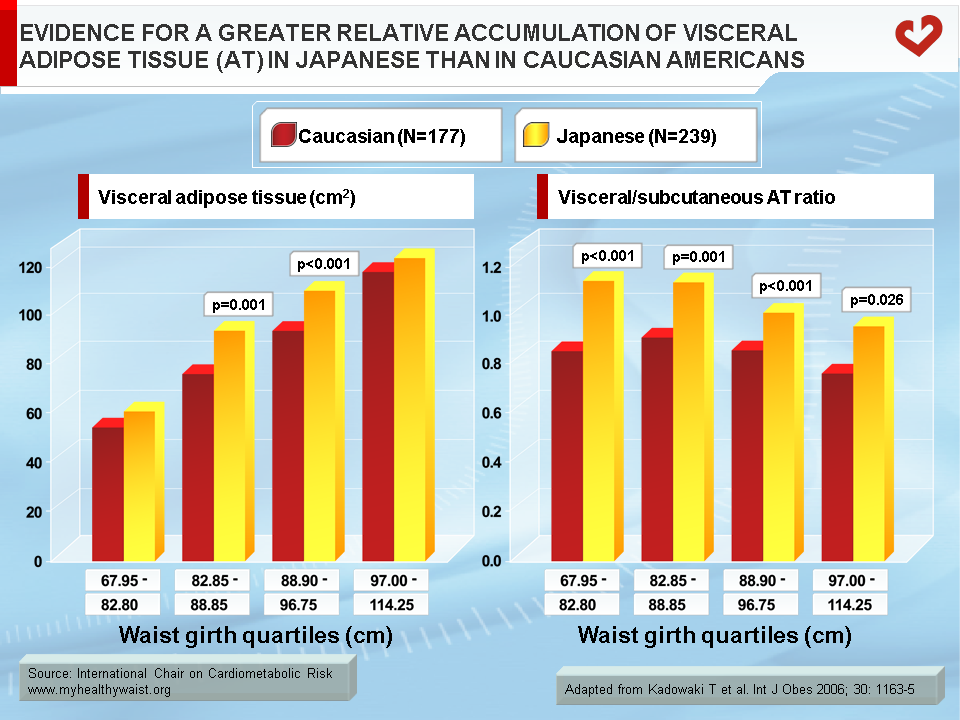 Figure 1:
Evidence for a greater relative accumulation of visceral adipose tissue in Japanese than in Caucasian Americans 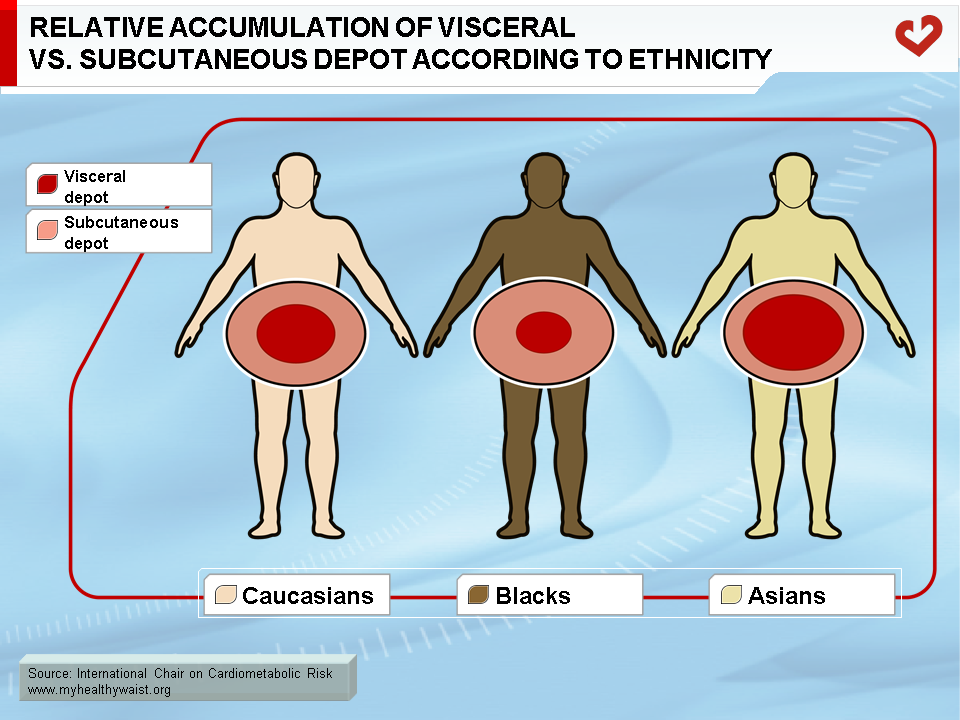 Figure 2:
Relative accumulation of visceral vs. subcutaneous depot according to ethnicity

The Influence of Ethnicity on Metabolic Complications

Ethnic differences do seem to influence adipose tissue distribution. It has been suggested that Asian, Hispanic, and Caucasian populations are particularly prone to visceral obesity and its associated health risks.

Compared to Whites, Blacks generally have a better lipoprotein-lipid profile, including lower fasting triglyceride and apolipoprotein B levels as well as higher HDL cholesterol concentrations [6,8,9]. Després et al. [8] have found that visceral adipose tissue accumulation was a critical correlate of plasma triglycerides, apolipoprotein B, and HDL cholesterol, suggesting that the more favourable metabolic profile of black individuals could be due to the fact that they are less prone to visceral fat deposition than white individuals. Black subjects also have significantly higher postheparin hepatic lipase and lower hepatic lipase activity than white subjects, both in men and women [8]. The low hepatic lipase activities in Blacks may have a genetic basis and contribute to their higher plasma HDL cholesterol concentrations when compared to Whites [19].

Though they have less visceral adipose tissue accumulation, black women are especially prone to insulin resistance. This finding holds up even after matching them with white women for age, degree of obesity, and waist-to-hip ratio as a relative index of abdominal obesity [9]. Among women, upper body obesity independent of total body fatness has been shown to be less detrimental to black women than to white women with regard to the risk of developing diabetes and CVD [20]. This could be explained by the fact that black women are more likely than white women to store their excess trunk fat subcutaneously.

Adiponectin concentrations—which are inversely associated with the level of obesity— have been shown to be higher in American men (whites 99%) than in Japanese men, despite American men’s higher levels of obesity [26]. It has been suggested that American men’s smaller relative visceral adipose tissue deposition may account for this difference. These results are supported by Côté et al. [27], who have emphasized that adiponectin is more influenced by visceral than subcutaneous adiposity.

There is growing literature on the impact of ethnicity on adipose tissue distribution. It has been proposed that the greater propensity of some populations to accumulate visceral adipose tissue could explain their higher rates of type 2 diabetes and CVD. Further research is needed to establish a clear definition of high-risk abdominal obesity in various populations worldwide. Large epidemiological studies that use computed tomography and metabolic profiling to measure visceral fat directly hold out the greatest potential. These methods will enable researchers to propose ethnicity-specific waist circumference values predictive of excess visceral adiposity and related health risk worldwide.

WHO Expert Consultation. Appropriate body-mass index for Asian populations and its implications for policy and intervention strategies. Lancet 2004; 363: 157-63.

Deurenberg P, Deurenberg-Yap M and Guricci S. Asians are different from Caucasians and from each other in their body mass index/body fat per cent relationship. Obes Rev 2002; 3: 141-6.