The Diabesity Epidemic: a Growing Burden

Among well-established cardiovascular risk factors, obesity and diabetes are on the rise [1,2]. The coronary heart disease mortality risk of diabetic patients without previous cardiovascular complications has been shown to be similar to that of nondiabetic patients who previously had a myocardial infarction [3]. This suggests that cardiovascular risk factors and complications should be treated aggressively in diabetic patients, who should be seen as post-myocardial infarction patients from a global cardiovascular disease risk standpoint [3]. Moreover, obesity—abdominal obesity in particular—is one of the major risk factors for diabetes along with physical inactivity and family history [3, 4]. To illustrate the consequences of obesity, Allison et al. [5] used data from five large cohort studies to estimate annual obesity-related deaths among U.S. adults. They estimated that obesity was a factor in approximately 280,000 deaths per year and that more than 80% of these deaths occurred among persons with a body mass index (BMI) superior to 30 kg/m2.

Shafrir [6] coined the term “diabesity” 10 years ago to illustrate the close relationship between obesity and diabetes. Both diseases share common causes, including lack of exercise and low energy expenditure combined with an unhealthy diet high in fat and refined sugar. The increasing prevalence of obesity and diabetes worldwide is a major public health threat and fighting this two-pronged epidemic will certainly be one of the biggest challenges for health professionals and our society in coming decades. This epidemic is expected to have serious health and economic consequences as obesity and diabetes rates continue to soar [7]. Obese and diabetic patients are more likely to be hospitalized for cardiovascular complications and other diabetes-related problems, such as microvascular complications, than normal weight, nondiabetic individuals.

The International Diabetes Federation (IDF) has reported that the annual global health expenditure related to diabetes is estimated to be US$760 billion. These direct costs will reach US$845 billion by 2045.

The World Health Organization (WHO) has estimated that at least 1.9 billion adults (18 years and older) worldwide were overweight in 2016, with 650 million of them being clinically obese [8]. The WHO has also reported that more than 340 million children and adolescents (5-19 years) were overweight and obese in 2019 [8]. Although the respective prevalence of obesity and diabetes is higher in western societies, these cardiovascular risk factors are rising dramatically in developing countries [2,9]. For example, in India’s fast-expanding urban centres, diabetes rates are double those in the United States [10]. Moreover, certain populations such as the Wanigela people of Papua New Guinea and the Pima Indians in Arizona are very susceptible to obesity and type 2 diabetes [11,12]. The following section provides epidemiological evidence of the obesity and diabetes epidemic that is currently sweeping the world.

Though obesity is increasing rapidly in almost every part of the world, overweight and obesity rates are higher in the United States than in any other developed country [13]. A report from the National Health and Nutrition Examination Survey (NHANES)—which examined a nationally representative sample of the U.S. population—revealed that more than two thirds of the adult population (>20 years) was either overweight (BMI>25 kg/m2) or obese (BMI>30 kg/m2) [1]. The sample included 4,431 adults and showed that overweight/obesity was higher in men (70.8 ± 1.4%) than in women (51.7 ± 2.6%). The highest prevalence of overweight/obesity was among men 40 to 50 years of age (78.2 ± 2.8%). The prevalence of overweight/obesity in women in this age subgroup was 68.1 ± 3.1%. The sample was also analyzed according to ethnicity (non-Hispanic whites, non-Hispanic blacks, and Mexican Americans). The highest rates of overweight/obesity were found in the non-Hispanic black population (76.1 ± 1.5%) and among Mexican Americans (75.8 ± 2.6%). This prevalence was 64.2 ± 1.6% in the non-Hispanic white population. When these results were compared to previous results from the 1999 NHANES survey, it was found that obesity among men had increased significantly between 1999 and 2004 whereas obesity among women had not increased over the same 6-year period [1]. The study also made the unfortunate finding that obesity is increasing in children and adolescents 2 to 19 years of age, noting that 17.1 ± 1.2% of them had excess body weight.

Another study using data from NHANES surveys has suggested that obesity is associated with excess deaths in the United States [15]. The strongest association between elevated body weight and mortality was observed in men and women 25 to 59 years of age who had a BMI ≥ 35 kg/m2 and a relative risk of overall mortality of 1.83 (95% CI, 1.27-2.62) compared to the normal weight category. This study also highlighted that the association between excess body weight and mortality was stronger in NHANES I than in NHANES III, suggesting that public health and medical care improvements may be weakening the ties between elevated BMI and mortality. To illustrate the growing obesity epidemic, Figure 1 shows the increase in overweight and obesity rates in U.S. children and adults from 1960 to 2000.

Other affluent countries such as the United Kingdom have also experienced a sharp jump in obesity in recent decades. The Health Survey for England indicated that obesity rose threefold between 1980 and 2002. In 1980, 6% of men and 8% of women were obese. In 2002, these figures reached 23% for men and 25% for women. Like most other Western countries, obesity tended to increase with age (up to 64 years), be higher in people with low income or low education, and show an upward trend in children and adolescents, suggesting that obesity rates in young adults are sure to rise in coming years [16].

Obesity rates are lower in Scandinavian countries than in other developed societies. Yet obesity rates are also on the rise in this part of the world as well. According to the Survey of Living Conditions, obesity doubled in Swedish men and women aged 16 to 84 between 1980-1981 and 2002-2003 [17]. Overweight and obesity rates increased dramatically between 1971 and 1995. Hardest hit were 18-year-old boys. For them, the prevalence of overweight doubled to 16.3% and the prevalence of obesity almost quadrupled to 3.2% [18].

China is a good example of how the growing obesity epidemic takes root in countries moving to a capitalist, free market economy. China is the world’s most populated country with one-fifth of the world’s population. The country’s economy is growing exponentially with the per capita gross domestic product increasing tenfold between 1982 and 2000 [19].

Over the last few decades, the Chinese population has become more sedentary, more urbanized, and increasingly reliant on cars and high-calorie, energy-dense food. These cultural and behavioural changes have had a considerable impact on Chinese obesity rates. A meta-analysis by Wang et al. [19] reported that, between 1992 and 2002, obesity and overweight increased in both sexes, in all age groups, and in all geographic areas. According to the WHO classification of obesity and overweight, the percentage of obese and overweight Chinese adults—which was 14.6% in 1992—has now increased to 21.8%. Although rates of obesity and overweight are somewhat lower than in the United States, the striking increase in obesity and overweight in China combined with the fact that this population is more prone to diabetes than Caucasians could mean that a dramatic spike in Chinese diabetes rates is just around the corner. Chinese urban residents are more likely to be overweight and obese. In 2002, according to Chinese standards of overweight (24 ≤ BMI < 28 kg/m2) and obesity (BMI ≥ 28 kg/m2), 35.1% of Beijing adults were overweight and 20.6% were obese. In addition to showing that overweight and obesity had increased 50% in the last decade, the study also highlighted significant changes to mortality and morbidity patterns in China. Though infectious diseases dropped sharply, there was an increase in chronic diseases related to excess body weight, such as hypertension, cardiovascular disease, and type 2 diabetes [19]. 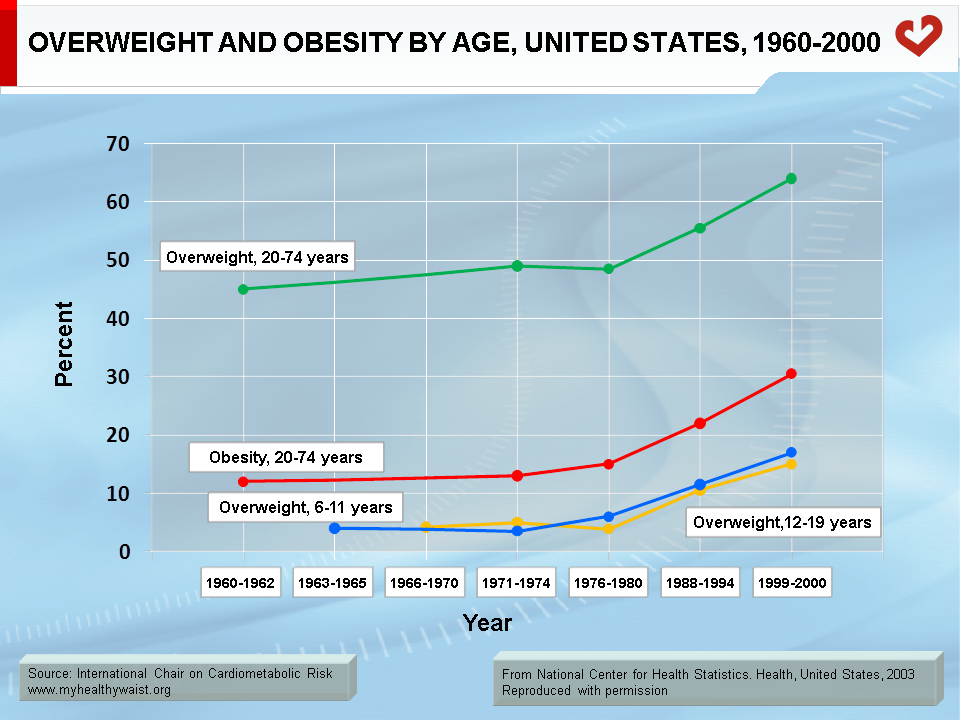 The global diabesity epidemic and its related comorbidities have now attacked children and adolescents all over the world. Maternal and paternal obesity, a sedentary lifestyle, and low birth weight are all risk factors tied to excess body weight in youth [20]. According to the WHO, the prevalence of overweight and obesity among children and adolescents (5-19 years) increased from 4% in 1975 to more than 18% in 2016 [8]. NHANES evaluated the prevalence of childhood obesity in the U.S. between 1976 and 2002 and found that overweight and obesity rates went from 4% to 6% between 1976 and 1980 and reached 16% in 2002 [21].

Diabetes is now considered to be the 7th leading cause of death worldwide after ischemic heart disease, stroke, chronic obstructive pulmonary disease, lower respiratory infections, Alzheimer disease and other dementias; and trachea, bronchus and lung cancers [25]. Similar to those for obesity, risk factors for type 2 diabetes include age, family history of type 2 diabetes (or obesity), impaired glucose metabolism, physical inactivity, and ethnicity. Obesity is also a major modifiable risk factor for type 2 diabetes [3]. It has been proposed that between 60% and 90% of type 2 diabetes cases are due to excess body weight [26]. Worldwide, 177 million individuals were considered to be diabetic in 2000 and some 90-95% of them had type 2 diabetes [27]. According to the CDC, nearly 21 million Americans have diabetes. The CDC has also reported that among those 20 and over, 8.7% of non-Hispanic whites, 13.3% of non-Hispanic blacks, and 9.5% of Hispanic/Latino Americans have diabetes. Non-Hispanic blacks are 1.8 times more likely to develop diabetes than non-Hispanic whites. It has been estimated that, in 2000, excess mortality due to diabetes accounted for over 8% of deaths in Western societies such as the U.S. and Canada and for 2-3% of deaths in poorer countries [28]. Although diabetes rates are lower in developing countries, rates are shooting up in the Middle East, Pacific Islands, Southeast Asia, and China, especially in urban areas (Table). To illustrate diabetes’ global reach and the continuing type 2 diabetes epidemic, Figure 2 depicts the prevalence of diabetes in many parts of the world along with projected percent changes up to the year 2030 as estimated by Wild et al. [29]. For example, the number of diabetic individuals in India is expected to increase threefold between 2000 and 2030.

Moreover, even if obesity rates stabilize during this period (which is very unlikely to happen), the number of people with diabetes worldwide would still double because of urbanization, aging, and improved survival [30].

In summary, sweeping public health measures should be implemented throughout the world to counter the diabesity epidemic. These measures should encourage all people to take part in regular physical activity, regardless of their age, sex, or social class. In preventing obesity and obesity-related diabetes, special emphasis should also be placed on improving the nutritional habits of at-risk individuals and the general population, who are likely to eat energy-dense diets. According to the IDF, up to 80% of type 2 diabetes cases can be prevented by adopting a healthy diet and increasing physical activity. It is equally important to diagnose type 2 diabetes since over 50% of type 2 diabetes sufferers around the world are unaware of their condition. 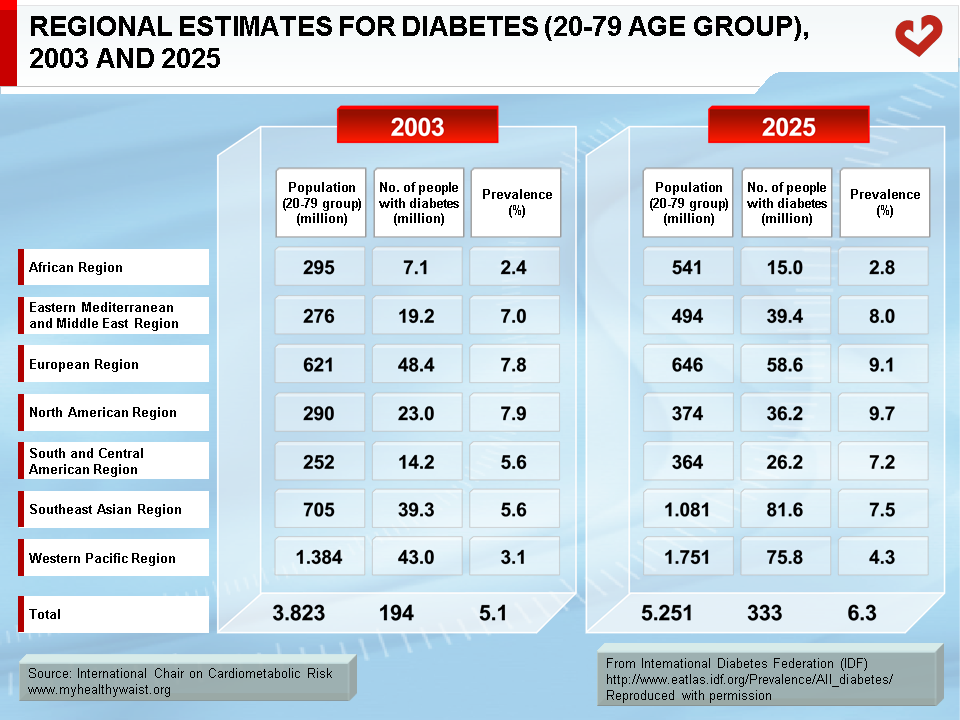 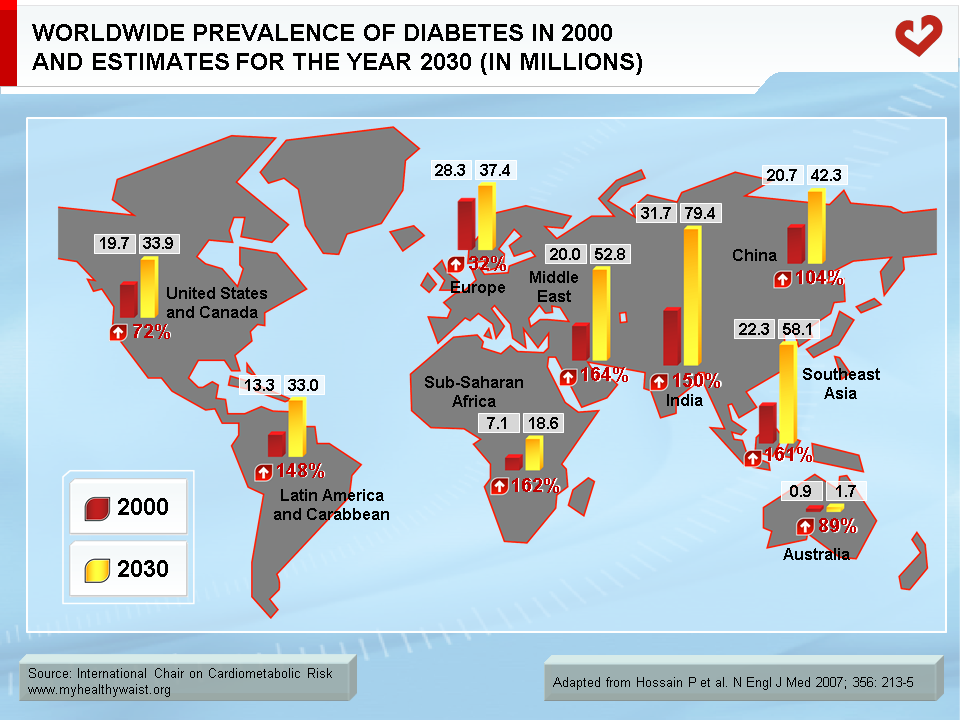 Figure 2:
Worldwide prevalence of diabetes in 2000 and estimates for the year 2030 (in millions)

Ekelund U, Griffin SJ and Wareham NJ. Physical activity and metabolic risk in individuals with a family history of type 2 diabetes. Diabetes Care 2007; 30: 337-42.

Amos AF, McCarty DJ and Zimmet P. The rising global burden of diabetes and its complications: estimates and projections to the year 2010. Diabet Med 1997; 14 Suppl 5: S1-85.