International Diabetes Federation (IDF) clinical criteria for diagnosing the metabolic syndrome were proposed in 2005 (Table 1) [1,2]. These criteria provide a new screening strategy for diagnosing the metabolic syndrome in clinical practice and are not a new “definition” of the syndrome. These screening tools are similar to those proposed by the National Cholesterol Education Program (NCEP) expert panel on detection, evaluation, and treatment of high blood cholesterol in adults (Adult Treatment Panel III or ATP III). However, since the clinical criteria of many organizations did not consider ethnic differences in body fat distribution and susceptibility to visceral adiposity, the IDF committee proposed ethnic-specific waist cutoff values (Table 2). For instance, some ethnic groups, such as Asians, are more likely to develop complications of the metabolic syndrome at much lower waist circumference than Caucasians [3].

Table 1:
Criteria for the clinical diagnosis of the metabolic syndrome according to the IDF 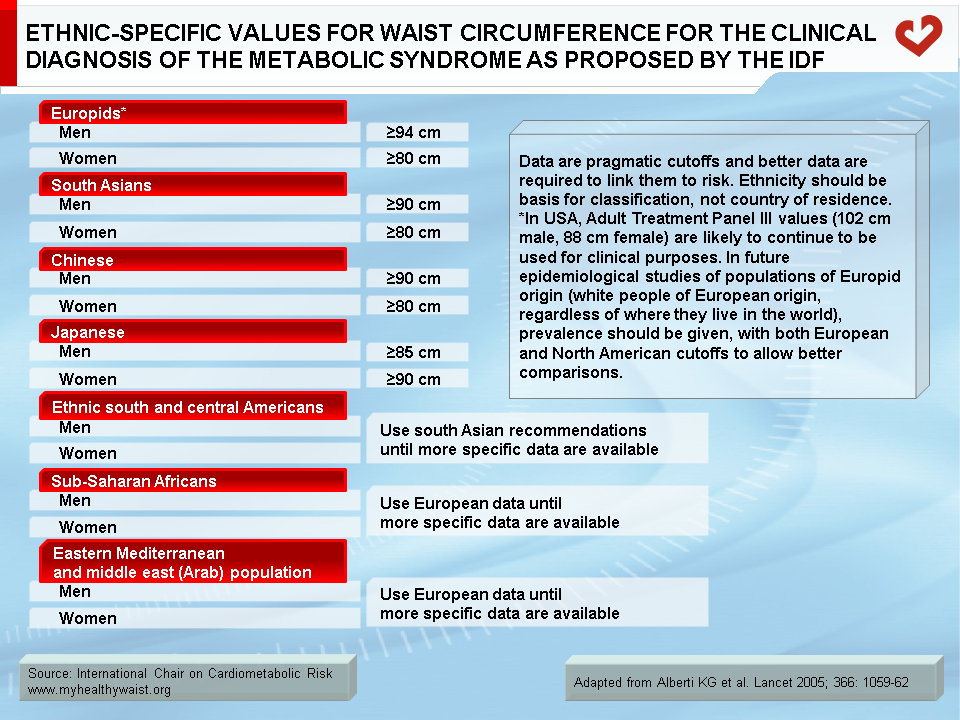 Table 2:
Ethnic-specific values for waist circumference for the clinical diagnosis of the metabolic syndrome as proposed by the IDF

As demonstrated in the Bruneck study, insulin resistance is a very common feature of the metabolic syndrome and its associated diabetic dyslipidemia [13]. Although insulin resistance is closely associated with the metabolic syndrome, fasting glucose (a marker of insulin resistance) is not a mandatory criterion for diagnosing the metabolic syndrome. The proposed cutoff value is 5.6 mmol/l (100 mg/dl) (or previously diagnosed diabetes), as suggested by the American Diabetes Association [14]. If fasting glycemia is between 6.1 (110 mg/dl) and 6.9 mmol/l (125 mg/dl), the IDF suggests performing an oral glucose tolerance test to diagnose impaired glucose tolerance or type 2 diabetes [15]. The IDF calls on insulin-resistant patients to adopt a healthy lifestyle, highlighting the fact that subjects in the Diabetes Prevention Program and Finnish Diabetes Prevention Study who modified their lifestyle were able to reduce or delay the onset of type 2 diabetes [16,17].

Regarding the pro-inflammatory and pro-thrombotic profile, the IDF singles out the inflammatory marker C-reactive protein, which is positively associated with insulin resistance and obesity, as a common feature of the metabolic syndrome [18]. Components of the pro-thrombotic profile of the metabolic syndrome include fibrinolytic factors such as plasminogen activator inhibitor-1. The IDF also believes that further research is required in this area, as other adipokines resulting from the macrophage infiltration of adipose tissue, such as tumour necrosis factor-α and interleukin-6, are thought to significantly influence the insulin resistance tied to visceral adipose tissue and the related inflammatory state. The mechanisms by which fibrinolytic and clotting factors such as fibrinogen are associated with the metabolic syndrome need further clarification. For more information, please refer to Complications of Visceral Obesity and Managing CMR sections.

One of the most important studies to tie the metabolic syndrome (as diagnosed by the IDF) to CVD mortality is the Diabetes Epidemiology: Collaborative analysis Of Diagnostic criteria in Europe (DECODE) Study. A total of 4,715 men and 5,554 women 30 to 89 years of age were drawn from nine European population-based cohorts [19]. The maximum follow-up periods ranged from 7 to 16 years. Metabolic syndrome prevalence was 35.9% in men and 34.1% in women. Hazard ratios (HR) were estimated using Cox regression analysis. A total of 105 men with the metabolic syndrome died from CVD, and the unadjusted HR was 1.79 (95% CI, 1.36-2.36). A total of 47 women with the metabolic syndrome died from CVD (the unadjusted HR for women was 2.38; 95% CI, 1.55-3.65). The DECODE Study also looked at the relationship between World Health Organization (WHO) clinical criteria, NCEP-ATP III guidelines, and revised NCEP-ATP III guidelines. Study findings are summarized in the Comparison of Screening Tools section.

Interestingly, a cohort study of 4,350 Chinese patients with type 2 diabetes failed to find a positive association between the metabolic syndrome as defined by the IDF and CHD (myocardial infarction, ischemic heart disease, coronary revascularization, heart failure, and CHD-related death) [20]. Median study follow-up was 7.1 years. Compared to subjects without the metabolic syndrome, the HR for individuals with the metabolic syndrome (as identified by the IDF) was 1.13 (95% CI, 0.86-1.48). However, the authors reached different conclusions with NCEP-ATP III clinical criteria, as discussed in the Comparison of Screening Tools section. After adjusting for confounding variables, the best predictors of incident CHD in this diabetic population were systolic blood pressure and HDL cholesterol levels.

To assess CHD risk related to the metabolic syndrome, Bataille et al. [22] conducted a nested case-control study in the PRIME (étude PRospective de l’Infarctus du MyocardE-Prospective Epidemiological Study of Myocardial Infarction) cohort. The PRIME study was conducted in Northern Ireland (Belfast) and France, particularly in Lille (North), Strasbourg (East), and Toulouse (Southwest). The study sample included 296 cases of incident CHD and 540 CHD-free controls, all of whom were men 50 to 59 years of age. The study follow-up was five years. When IDF clinical criteria for the metabolic syndrome were used, the metabolic syndrome was prevalent in 38.9% of cases and 32.4% of controls. When the data was analyzed separately (Ireland and France), the odds ratio (OR) for future CHD was not significant. However, when the entire sample was studied, the future CHD OR for individuals with IDF clinical criteria for the metabolic syndrome was 1.41 (95% CI, 1.02-1.95, p<0.04). The findings were very similar when the WHO and NCEP-ATP III clinical criteria were compared.

In the Hong Kong Cardiovascular Risk Factor Prevalence Study, Cheung et al. [23] studied the association between IDF and NCEP-ATP III metabolic syndrome criteria and diabetes incidence in 1,679 men and women (mean age: 45.1 ± 11.9 years) without diabetes at baseline who were followed for six years. There were 120 new onset diabetes cases during follow-up. The HR for diabetes incidence was 3.5 (95% CI, 2.3-5.2) when IDF clinical criteria were used. The authors suggested that the presence of the metabolic syndrome in someone without diabetes should be a strong warning sign. Moreover, lowering abdominal obesity cutoff values in this Asian population appeared to be justified given that the area under the receiver operating characteristic curves tended to be higher in both men and women when lower waist circumference cutoffs were used.

It is important to mention that although the presence of the metabolic syndrome increases relative risk of CVD/CHD, it diagnosis cannot be used to assess absolute CVD/CHD risk. This can only be done by taking into account traditional CHD risk factors such as age, sex, LDL and HDL cholesterol, blood pressure, smoking, and diabetes. However, clinical diagnosis of the metabolic syndrome can “fine tune” CHD risk prediction on top of traditional risk factors. It is not designed to replace these risk factors, as discussed in other sections.

In summary, IDF clinical criteria for the diagnostic of the metabolic syndrome include mandatory inclusion of the waist circumference measurement. Region-specific cutoff values have now been proposed since the relationship of abdominal obesity to CHD or type 2 diabetes varies between ethnic groups. Additional studies are needed to further validate these new criteria and their ties to hard CHD endpoints. Moreover, specific cutoff values will be required for Central American, Sub-Saharan African, and Middle Eastern countries that were not considered in the IDF criteria due to lack of specific data. A review paper has summarized the assessment, management and prevention of metabolic syndrome in individuals from various ethnic groups [24].

For more information, please visit the IDF website at https://www.idf.org/.

Qiao Q. Comparison of different definitions of the metabolic syndrome in relation to cardiovascular mortality in European men and women. Diabetologia 2006; 49: 2837-46.