Other Tools (WHO, EGIR and AACE)

WHO Definition and Criteria

In 1998, the World Health Organization (WHO) was the first major organization to propose a definition of the metabolic syndrome (Table) [1]. In accordance with the syndrome X concept introduced by Reaven [2] (a combination of elevated fasting triglyceride and insulin concentrations, reduced HDL cholesterol levels, and raised blood pressure, with insulin resistance as a common denominator), the WHO definition also identified insulin resistance as the most common etiological factor behind the clustering abnormalities of the metabolic syndrome [2]. An index of glucose intolerance, impaired glucose tolerance, or diabetes and/or insulin resistance (insulin sensitivity measured under euglycemic-hyperinsulinemic conditions) was therefore a necessary WHO criterion for clinical diagnosis of the metabolic syndrome. Insulin resistance also had to be accompanied by at least two other criteria from among the following: raised blood pressure (≥140/90 mmHg), increased plasma triglyceride (≥1.7 mmol/l (150 mg/dl)) and/or reduced HDL cholesterol levels (<0.9 mmol/l (35 mg/dl) for men and < 1.0 mmol/l (39 mg/dl) for women), obesity as estimated by waist-to-hip ratio (>0.90 for men and >0.85 for women) and/or body mass index (BMI) >30 kg/m2 for both sexes, and microalbuminuria (urinary excretion rate ≥20 μg/min or albumin-creatinine ratio ≥30 mg/g).

The original WHO recommendations were intended to serve as working guidelines for research purposes. They were not designed to provide an exact definition for clinical diagnosis. The initial recommendations have remained controversial for a number of reasons. First, debate continues as to whether microalbuminuria is a necessary component of the metabolic syndrome. Although microalbuminuria is a marker of endothelial dysfunction and a predictor of increased cardiovascular risk, its relationship with the other components of the metabolic syndrome and the need to include this criterion in the clinical diagnosis of the metabolic syndrome are not firmly established [3,4]. Controversy also surrounds the use of waist-to-hip ratio versus waist circumference alone. It has been shown that waist circumference better indicates visceral adipose tissue accumulation (as measured with computed tomography, the gold standard method) than waist-to-hip ratio which is an index of relative abdominal fat deposition [5]. In addition, insulin resistance must be assessed for the metabolic syndrome to be properly diagnosed using WHO criteria. The preferred method is the clamp technique. Because this technique requires time and technical expertise, it was acknowledged that the euglycemic-hyperinsulinemic clamp would never be used by health professionals in clinical practice to screen for the presence of the metabolic syndrome in asymptomatic individuals. Moreover, apart from the European Group for the Study of Insulin Resistance (EGIR), very few epidemiological studies have measured subject insulin sensitivity with the clamp technique. It is therefore hard to develop large databases to generate population-based data on insulin resistance assessed with this technique [6]. In its 1998 statement, WHO stressed that the metabolic syndrome could be present for up to 10 years before any measurable glycemic disorders were detected, underlining the fact that individuals with normal glycemic control could still be at increased cardiovascular disease (CVD) or type 2 diabetes risk if they show other features of the metabolic syndrome. WHO called for the early detection and aggressive management of the metabolic syndrome to prevent related chronic diseases. The WHO group also called for future research in this area in order to understand and integrate the relevance of each component of the metabolic syndrome. 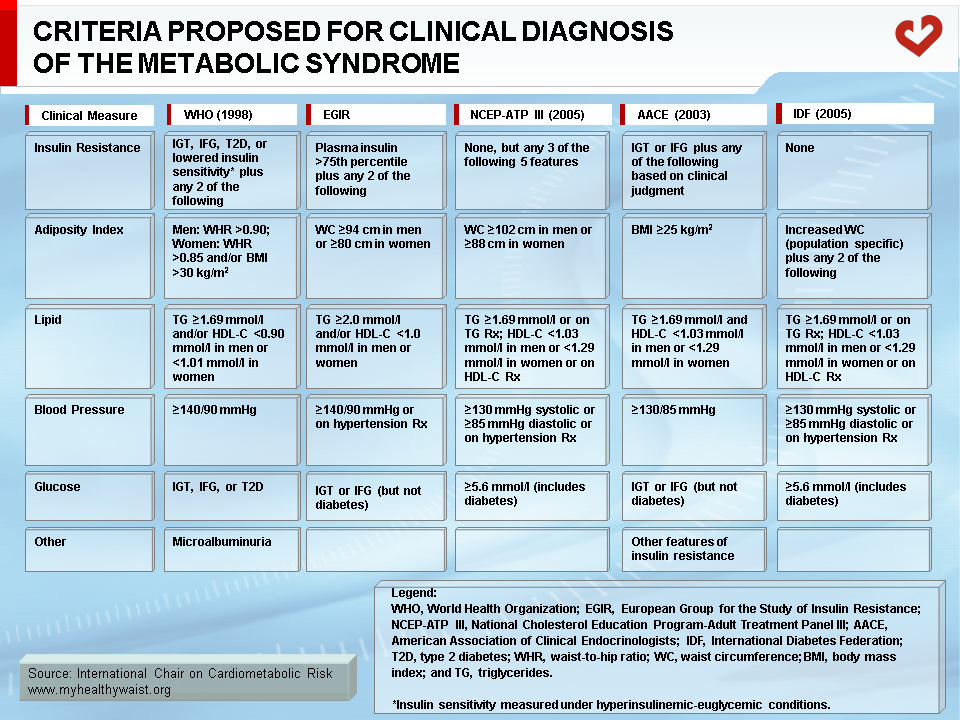 Table:
Criteria proposed for clinical diagnosis of the metabolic syndrome

According to EGIR, the insulin resistance syndrome should be diagnosed if insulin resistance is observed with two or more of the following abnormalities: fasting plasma glucose concentrations ≥6.1 mmol/l without diabetes, blood pressure ≥140/90 mmHg or treatment for elevated blood pressure, triglyceride levels >2.0 mmol/l (177 mg/dl) or treatment for elevated triglycerides and/or HDL cholesterol levels <1.0 mmol/l (88 mg/dl) or treatment for reduced HDL cholesterol levels, or an increased waist circumference (≥94 cm for men and ≥80 cm for women). EGIR criteria for blood pressure and dyslipidemia were drawn from the report of the Second Joint Task Force of European and other Societies on Coronary Prevention, which suggested that proposed cutoff values for blood pressure, triglyceride, and HDL cholesterol levels were associated with increased coronary heart disease risk [9]. Regarding obesity criteria, EGIR did not incorporate BMI in its diagnosis variables because the association between BMI and insulin resistance is not very clear, obesity being heterogeneous and not always associated with insulin resistance [10]. In addition, waist-to-hip ratio was omitted and waist circumference included since it is a better correlate of visceral adiposity than waist-to-hip ratio [5]. EGIR also excluded microalbuminuria from its criteria since the relationship between microalbuminuria and insulin resistance is not clear.

The American Association of Clinical Endocrinologists (AACE) presented its official position on the “insulin resistance syndrome” in 2003 (Table) [11]. Unlike WHO and EGIR, AACE deliberately chose not to provide a specific definition of the insulin resistance syndrome, suggesting instead that diagnosis should depend on individual clinical judgement. AACE’s decision was based on the fact that the field is evolving rapidly and that it did not feel comfortable making a firm decision on proposed criteria cutoff values until more data was available. Regarding criteria to be included, AACE adopted the same clinical criteria as the National Cholesterol Education Program (NCEP) expert panel on detection, evaluation, and treatment of high blood cholesterol in adults (Adult Treatment Panel III or ATP III) for blood pressure and lipid criteria (which were also endorsed by the International Diabetes Federation). Blood pressure above 130/85 mmHg, triglyceride concentrations above 1.7 mmol/l (150 mg/dl), and HDL cholesterol concentrations below 1.04 mmol/l (40 mg/dl) for men and below 1.29 mmol/l (50 mg/dl) for women are therefore abnormalities of the insulin resistance syndrome. AACE also stated that fasting plasma glucose concentrations between 6.1 mmol/l (110 mg/dl) and 6.9 mmol/l (125 mg/dl) and plasma glucose concentrations between 7.8 (140 mg/dl) and 11.1 mmol/l (200 mg/dl) after a two-hour glucose challenge should be considered another syndrome abnormality. The two-hour oral glucose tolerance test is recommended for at-risk individuals who do not meet the proposed criteria for the insulin resistance syndrome. The Task Force appointed by AACE suggested that other criteria should be added or revised for assessment of the syndrome.

These modifications include recognition of the limitations of fasting glucose values and recognition of the merits of the oral glucose tolerance test. In describing syndrome etiology, the Task Force remarked that obesity should not be seen as a consequence of insulin resistance, but more akin to a physiological factor affecting insulin sensitivity. Obesity should therefore be considered a causal risk factor of the insulin resistance syndrome. The Task Force also recommended adding BMI as a measure of obesity. It felt that waist circumference did not provide sufficient additional information on overall risk, though it does view abdominal obesity as a prevalent form of insulin resistance. The Task Force also called for obesity cutoffs to be adjusted for ethnicity and ethnicity per se to be considered a risk factor. Moreover, the Task Force suggested expanding the list of at-risk individuals and the list of associated disorders, such as familial history of type 2 diabetes, hypertension, CVD, personal history of CVD, polycystic ovary syndrome, gestational diabetes, and acanthosis nigricans. The AACE report also noted that physical inactivity is closely tied to insulin resistance and recommended early and more aggressive lifestyle interventions aimed at improving fitness and nutritional status to prevent the harmful effects of the insulin resistance syndrome. In addition, the report identified pharmacotherapy as an important option although very few pharmacological compounds have been proven to prevent, delay, or treat insulin resistance syndrome. Given this, thiazolidinedione compounds should benefit from further research to establish their clinical utility in targeting the insulin resistance syndrome. Special focus should be placed on their cardiovascular safety.

Although NCEP-ATP III clinical criteria are the most widely used in studies evaluating metabolic syndrome-related CVD risk, some studies have investigated whether WHO, EGIR, and AACE criteria also indicate increased CVD and type 2 diabetes risk. The most relevant studies are summarized in the Comparison of Screening Tools section.

None of the NCEP-ATP III, IDF, WHO, EGIR, and AACE working groups claimed that their criteria were best at defining and classifying individuals with the metabolic syndrome (or insulin resistance syndrome). Each of them called for further research to improve assessment and recommended the use of criteria that take into account obesity, dyslipidemia, insulin resistance, blood pressure, and the pro-inflammatory and pro-thrombotic state. They also agreed that the most promising treatment for the metabolic syndrome is lifestyle therapy because it works on both abdominal obesity and insulin sensitivity.

Hills SA, Balkau B, Coppack SW, et al. The EGIR-RISC STUDY (The European group for the study of insulin resistance: relationship between insulin sensitivity and cardiovascular disease risk): I. Methodology and objectives. Diabetologia 2004; 47: 566-70.

Balkau B and Charles MA. Comment on the provisional report from the WHO consultation. European Group for the Study of Insulin Resistance (EGIR). Diabet Med 1999; 16: 442-3.