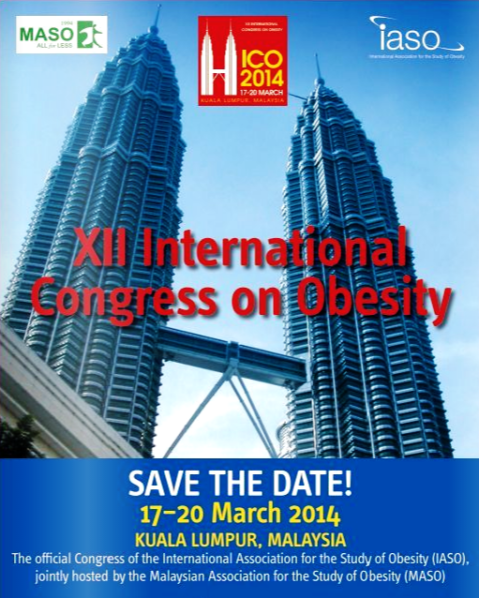 The International Congress on Obesity (ICO) is the official congress of the World Obesity Federation (WOF), jointly hosted with the Malaysian Association for the Study of Obesity (MASO).

The International Congress on Obesity (ICO) is held every 4 th year. The first ICO was in 1974 at London. Kobe hosted the ICO In 1990. After more than two decades, ICO 2014 was held in Asia, jointly by World Obesity (WO) (International Association for the Study of Obesity [IASO]) and Malaysian Association for the Studies of Obesity (MASO) at Kuala Lumpur Convention Center, near the famous Petronas Twin Towers. The venue had excellent infrastructure and easy accessibility. Rapid economic development of Asia with altered lifestyle has led to a significant increase in the prevalence of obesity and related burdens. The pace of the latter in Asia being more than anywhere in the world, it was the right time for ICO 2014. I, Dr. Naunihal Singh, Dr. Soumitra Ghosh, Dr. Anita Merani, and Dr. Brij Mohan Makkar from All India Association for Advancing Research in Obesity (AIAARO) attended.