Hypertension is one of the traditional modifiable cardiovascular disease (CVD) risk factors [1]. Stage 1 hypertenson is defined as systolic blood pressure (BP) between 130-139 mmHg or diastolic BP between 80-89 mmHg while stage 2 hypertension is defind as systolic BP ≥140 mmHg or diastolic BP ≥90 mmHg [1]. Normal and desirable BP values should fall below 120/80 mmHg (Table). The elevated stage is a critical step forward for healthcare professionals by enabling them to take action to prevent their patients from eventually progressing to full-blown hypertension [1]. 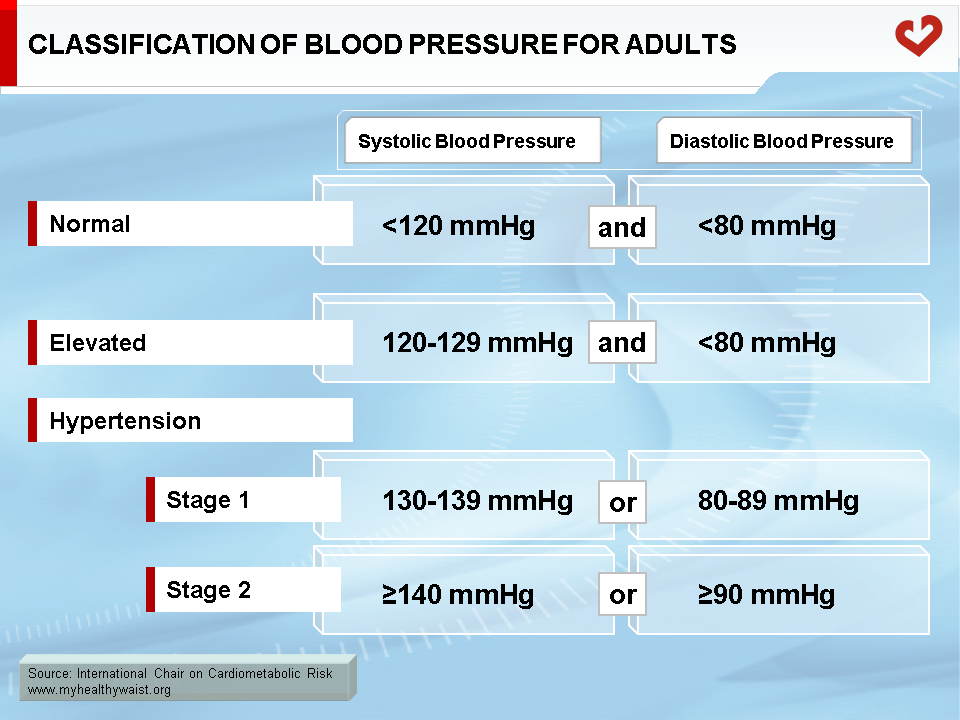 Hypertension is one of the most important modifiable risk factors for coronary heart disease, stroke, congestive heart failure, renal disease, and peripheral vascular disease. Arterial BP is a product of cardiac output and systemic vascular resistance. A number of factors modulate BP for adequate tissue perfusion, including humoral mediators, vascular reactivity, circulating blood volume, vascular calibre, blood viscosity, cardiac output, blood vessel elasticity, and neural stimulation [3]. Although genetics appears to play a role in essential hypertension, the exact mechanism has not been established. Uncontrolled and prolonged elevation of BP can cause adverse changes to cardiac structure and function in two ways: directly by increased afterload and indirectly by associated neurohormonal and vascular changes. Accordingly, hypertension can damage various organs of the cardiovascular and central nervous system and is a frequent cause of renal disease.

Data on more than one million individuals has shown that death from both IHD and stroke increases progressively and linearly from BP levels as low as 115/75 mmHg [4]. Beginning at 115/75 mmHg, every 20/10 mmHg increase in BP doubles the rate of mortality from both IHD and stroke [4]. In addition, longitudinal observations from the Framingham Heart Study have shown that BP values from 130/85 to 139/89 mmHg increase CVD risk more than twofold when compared to BP levels below 120/80 mmHg [5]. In addition, systolic BP has been reported to be a more important CVD risk factor than diastolic BP. Indeed, higher systolic BP was associated with increased CVD risk after statistical adjustment for diastolic BP while diastolic BP was not consistently associated with CVD risk once adjustment for systolic BP was performed [1].

In the Framingham study, Wilson et al. [6] followed a cohort of 3,323 middle-aged adults for the onset of CVD, CHD, and type 2 diabetes over an 8-year period. They reported that hypertension and HDL cholesterol contributed most to CVD outcomes. In addition, elevated BP was found to enhance the risk of myocardial infarction (MI) in populations with severe hypercholesterolemia [7,8].

Hypertension is taking on greater importance as a medical and public health issue. The relationship between hypertension and CVD risk is well documented. An elevated BP increases the risk of MI, heart failure, stroke, as well as kidney and cerebrovascular diseases. Furthermore, hypertension is typically associated with abnormal cholesterol levels, a greater body mass index, and an increased prevalence of diabetes. Various hypertension management strategies are available to patients with elevated BP, including lifestyle modifications and antihypertensive drugs. However, healthcare professionals must not only identify and treat patients with hypertension, they must also promote a healthy lifestyle and emphasize prevention in order to decrease the prevalence of hypertension in the general population.