There is a definite sex difference in adipose tissue distribution:

A Question of Sex: Apples and Pears…

Thirty-five years later, Krotkiewski et al. [5] suggested that sex hormones might be involved in regulating the typical sex differences in regional body fat distribution. Their seminal work suggested that these differences were mainly due to the number of local fat cells: men had more fat cells in the abdominal region while women had more fat cells in the gluteal/femoral adipose depots [5]. They also observed that this regional adipose tissue distribution was unrelated to the presence or absence of obesity.

Through computed tomography and magnetic resonance imaging, several groups [8-10] have suggested using waist circumference measurement as an index of abdominal adipose tissue deposition in both men and women. Similarly, using anthropometric measurement to predict visceral adiposity, it has been found that for a given waist circumference, women generally have greater body fat mass and abdominal subcutaneous adipose tissue than men [10,11]. Moreover, through magnetic resonance imaging, Kuk et al. [11] demonstrated that for the same waist circumference, men had more visceral adipose tissue than women. They also found that for a given increase in waist girth, men had a greater accumulation of visceral adiposity than did women. 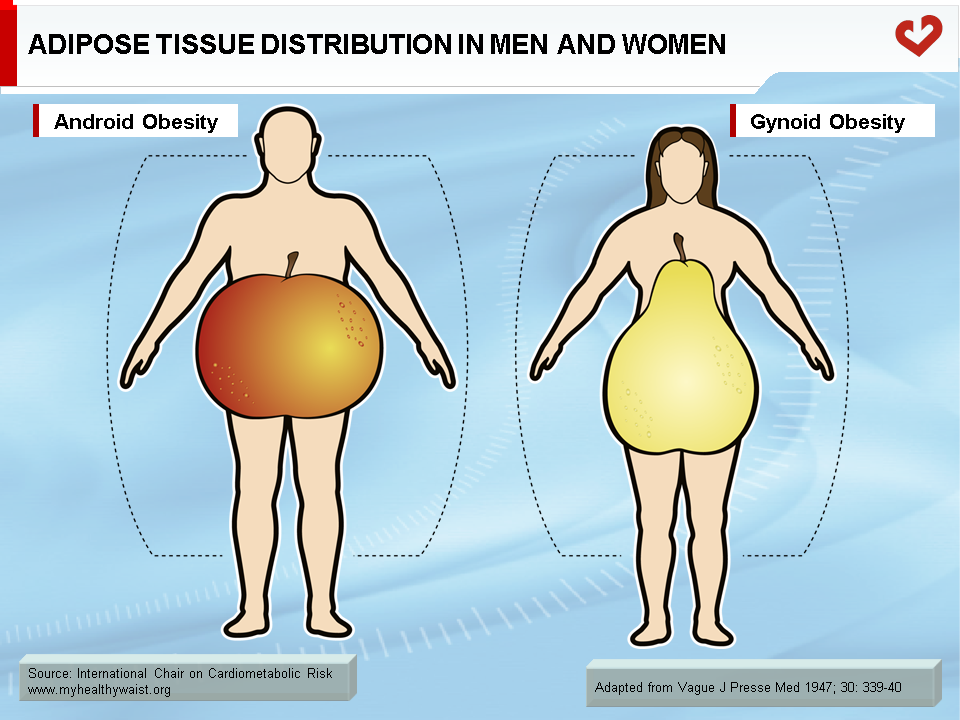 Men generally have more visceral adipose tissue than women, and women have more subcutaneous fat than men. It has been shown that visceral adipose tissue is a significant correlate of alterations in glucose tolerance and plasma lipoprotein-lipid levels, independent of total adiposity and abdominal subcutaneous adipose tissue [12-16]. In this regard, it has been suggested that the sex difference in the cardiovascular disease risk observed between men and pre-menopausal women could be explained, at least in part, by the sex difference in body fat distribution [17-19].

In summary, men’s tendency to accumulate visceral adipose tissue appears to be a key factor in predicting why obesity is much more hazardous in men than in pre-menopausal women. However, differences in male and female visceral adipose tissue accumulation cannot entirely explain the sex difference in the metabolic risk profile. It has been suggested that plasma sex hormones may play a significant role in modulating metabolic risk parameters beyond their effects on visceral fat accumulation.

Lemieux S and Després JP. Metabolic complications of visceral obesity: contribution to the aetiology of type 2 diabetes and implications for prevention and treatment. Diabete Metab 1994; 20: 375-93.

Larsson B, Bengtsson C, Bjorntorp P, et al. Is abdominal body fat distribution a major explanation for the sex difference in the incidence of myocardial infarction? The study of men born in 1913 and the study of women, Goteborg, Sweden. Am J Epidemiol 1992; 135: 266-73.

Lemieux I, Pascot A, Lamarche B, et al. Is the gender difference in LDL size explained by the metabolic complications of visceral obesity? Eur J Clin Invest 2002; 32: 909-17.