The Robert Levy Memorial Lecture was established in 2001 by the Council on Lifestyle and Cardiometabolic Health (previously the Council on Nutrition, Physical Activity and Metabolism) in recognition of Dr. Levy’s distinguished career in the field of lipidology and cardiovascular medicine. This year, Marja-Riitta Taskinen, an Emerita Professor of Medicine from the University of Helsinki and a member of the international academic board of the ICCR, received this prestigious award during the American Heart Association Scientific Sessions held in Anaheim, California (United States).

Professor Taskinen has made numerous seminal contributions to our understanding of lipoprotein physiology. Among her various scientific interests and activities, her work focused on lipoprotein kinetics in health and metabolic disorders, which include diabetes, dyslipidemias and genetic dyslipidemias. Although she published her first paper in 1968, Professor Taskinen has remained very active and still has a prolific career. She has so far published over 420 original scientific articles and more than 120 reviews and book chapters. She has received numerous awards during her career including the EASD Claude Bernard Medal and Lecture in 2002 and the ADA Edwin Bierman Award Lecture in 2004. Professor Taskinen was also honoured with the 2017 Jean Vague/Per Björntorp Award during the ICCR Congress on Chronic Societal Cardiometabolic Diseases. 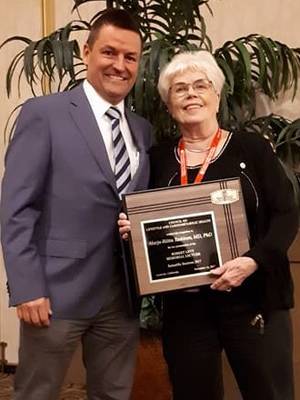 Professor Taskinen has played important roles in many professional associations. She was president of EAS, secretary of IAS and vice-president of EASD. In 2013, Professor Taskinen was a member of the Task Force on ESC Clinical Practice Guidelines on Diabetes, Pre-diabetes and Cardiovascular Diseases developed in collaboration with the EASD. She is still an active member of the EAS/ESC Guidelines Committee on the Management of Dyslipidemias and a member of EAS Consensus Paper Panel.

The ICCR is proud and very grateful to benefit from Professor Taskinen’s tremendous expertise and warmly congratulates her on this well-deserved recognition. She is an eminent scientist and an ambassador for women in science!